/ Corporate / The Age of Urban Tech

The Age of Urban Tech 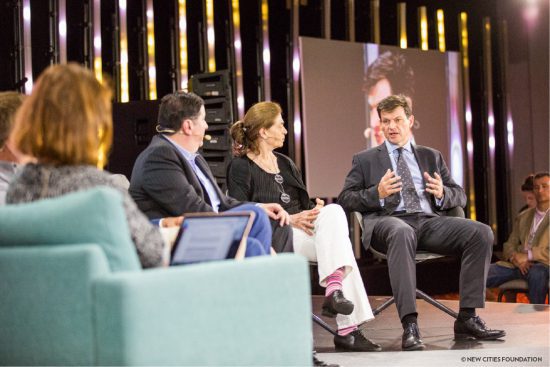 Cities all across the world are gearing up for the future. They know that big changes are coming and they are doing their best to transform challenges into opportunities.

That is why innovation, technology and city life were at the center of discussions during the 2016 New Cities Summit that was held in Montreal from June 21 to 23.

City officials, leaders in the arts, business and local communities gathered for the two-day event to share ideas and experiences on urban challenges. Tom Smith,Global Director, Property and Buildings at WSP Global and Doug Webber, Head of Sustainability and Energy, WSP Canada, attended the two-day conference.

Tom was also invited to be part of the closing session. “Technology helps cities build places that have positive impact on its residents,” he said in a panel called Placemaking: Building the Community through Urban Tech.

Beyond the Smart City

Cities know they must change because they are providers of first community services, like garbage collecting, road infrastructure, water distribution, safety, and so on. What was very clear from the many presentations and debates at New Cities Summit was cities understand that they must use innovation to succeed.

But it’s more than that. “Cities must decide where they want to go or what they want to be, and use technology to get there, said Timothy Papandreou, Director, Office of Innovation at San Francisco Municipal Transportation Agency (SFMTA). He was a speaker in a panel called Mobility as a service.

From his perspective, cities must determine the framework and let partners provide new services that are requested by populations. “We must get cars out of the cities. The question is: how do we do it,” he said. The Uber, Zipcar or other carsharing companies can help in solving many issues in transportation, he thinks.

All across the world, innovators and entrepreneurs are using technology and their creativity to provide real mobility solutions in urban centers. But technology must not be the final objective. As another panellist said : “Cities are too important to be left to technologists.” That person was Anil Menon, president of Smart+Connected Communities at Cisco.

There were also lots of talks about autonomous vehicles, an area of global expertise for WSP | Parsons Brinckerhoff, during the event, but for the moment, it is still difficult to see exactly how AV will impact the landscape of our cities.

In the future, less parking space will be needed because cars won’t stay at drivers’ destination. They will either drive themselves back home or make themselves available for other travellers. In the end, cities will have the opportunity to create something with the available space.

WSP | Parsons Brinkerhoff has already published a provoking document on that issue. It’s called Making Better Places and it was done in association with Farrells. We also produced another very interesting paper regarding the regulatory aspects touching driverless cars: Driving Towards Driverless – a guide for government agencies.

Lifestyle as a Service

Back to the summit. Bill Peduto, mayor of Pittsburgh, provided a good example of how technology can help a city. “We (the City of Pittsburgh) were dead. But our economy has come back, he said. We now use technology to help us manage our assets, our bridges, our roads, our steps.” The mayor went on and explained that thanks to social innovation, the city can now monitor and maintain one of its primary modes of transportation: the steps. “Pittsburgh has the most public steps of any city in America, with over 700 staircases,” said the mayor.

Social implication, innovation, communication are all intertwined in the future of cities. Solutions will come up if we look at challenges with new eyes. “Customers don’t care who or what brings them to where they are going. In fact, transportation mode is not important. We aim at mobility as a service, but ultimately, what we want is lifestyle as a service,” said Timothy Papandreou.

Cities are at a crossroad. With aging infrastructure, disruptive innovation and social changes taking place all at once, the time is ripe for cities to define what they want that future to be.

Commenting on the New Cities Summit – The Age of Urban Tech, Tom stated; “it was a great conference for WSP | Parsons Brinckerhoff to sponsor and there is no doubt that technology is rapidly changing the way our cities function but we are only in the embryonic phase. There is a long way to go but it is vital that WSP | Parsons Brinckerhoff stays at the vanguard of Urban Tech.