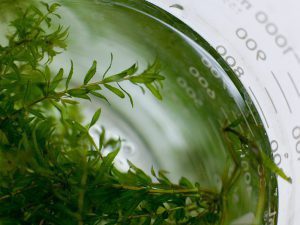 GAINESVILLE, Fla.—Of all the invasive plants in Florida’s waterways, hydrilla costs the most to contain — $66 million over a seven-year period, a University of Florida Institute of Food and Agricultural Sciences researcher says.

But UF/IFAS researchers are finding new ways to use less chemical treatment, and thus less money, to manage hydrilla.

From 2008 to 2015, state and federal water resource managers spent about $125 million to control invasive aquatic plants, according to an April Extension document co-written by Lyn Gettys, a UF/IFAS assistant professor of agronomy and aquatic weed specialist. You can find the document here: http://www.bit.ly/28UsGoh.
.
Of that $125 million, about $66 million goes to control hydrilla, according to the Florida Fish and Wildlife Conservation Commission.

The problem is so big that the UF/IFAS Center for Aquatic and Invasive Plants (CAIP) hosts a Plant Camp annually. In fact, last week, 24 teachers from across the state came to Gainesville to learn about invasive plants and how they can bring this knowledge and awareness into the classroom.

Hydrilla originally was used to decorate fish aquariums. It wound up mainly in South Florida waterways after aquarium plant dealers tossed the plants into canals in the 1950s. Hydrilla has now spread from Florida to Maine, California, Idaho, Massachusetts, New York, Washington and Wisconsin.

“Hydrilla restricts water flow, and that’s a problem especially in South Florida during tropical storms,” Gettys said. “Water can’t move in the canals, which can cause flooding.”

It also limits light from getting to underwater plants and fish, possibly choking off their oxygen and sometimes causing fish kills.

Furthermore, it creates problems for fishing areas. If a lake is about 50 percent full of hydrilla, approximately 60 percent of the lake’s users will fish and swim in other water bodies, said Bill Haller, a UF/IFAS agronomy professor and UF/IFAS CAIP program director.

When it comes to challenges faced by endangered species, invasive species are second only to habitat loss, Haller said. Controlling invasive plants protects native plants and animals, and it’s a constant battle — which is why the next generation needs to get involved, he said.

The state relies primarily on herbicide treatments to control hydrilla, but UF/IFAS scientists are continually studying and helping develop less-expensive and more selective treatments for the invasive plants with no or only minimal non-target damage to native plants.

For example, scientists statewide are trying to combine the sterile grass carp – a fish – with the chemical treatments, to better help manage hydrilla. The grass carp is used in more than 50 countries worldwide, but it eats everything, not just hydrilla, Haller said. Furthermore, in Florida it’s only used in enclosed small ponds, he said. Entomology faculty also are combining an insect with a native pathogen and plant growth regulator to reduce the prolific growth of hydrilla.

New aquatic invasive plants come along all the time, Haller said. For example, UF/IFAS Extension faculty are in the process of evaluating biocontrol insects to try to manage various invasive plants, including the water primrose, a relatively new, possibly hybrid plant that’s spreading quickly, he said.

Comments are disabled
NEXT ARTICLE
Four Winning Cities of the Every Place Counts Design Challenge Announced
June 28, 2016
PREVIOUS ARTICLE
The Concrete Convention Set for Philadelphia in the Fall
June 28, 2016