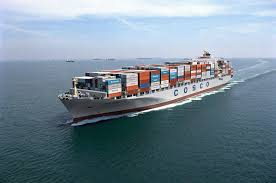 Originally named Andronikos, the vessel was renamed to honor and pay respect to the country of Panama and the Canal. Panamanian President Juan Carlos Varela and Panama Canal Administrator and CEO Jorge L. Quijano honored the almost 40,000 workers—who made the Expansion a reality—with a message of pride, accomplishment, hope and opportunity.

“Our commitment to provide value to our customers remains paramount. In 2015, we broke our tonnage record with 340.8 million PC/UMS in the original Canal,” said Mr. Quijano. “Today, we make history and improve global connectivity. We thank our customers for their support and appreciate the 170 reservations we have received thus far to transit the Expanded Canal.”

COSCO Shipping Panama set sail June 11 from the Greek Port of Piraeus carrying 9,472 TEUs and measuring 299.98 meters in length and 48.25 meters in beam. Later this afternoon, the vessel will reach the Pacific-facing Cocoli Locks where the official Inauguration ceremony will take place.

The Expansion Program is the Canal’s largest enhancement project. It included the construction of a new set of locks on the Atlantic and Pacific side of the waterway and the excavation of more than 150 million cubic meters of material, creating a second lane of traffic and doubling the cargo capacity of the waterway. While the Expanded locks are 70 feet wider and 18 feet deeper than those in the original Canal, they use less water due to water-savings basins that recycle 60 percent of the water used per transit.

Considered and analyzed for a decade with more than 100 studies, the Expansion will provide greater economies of scale to global commerce. It will introduce new routes, liner services, and segments (such as liquefied natural gas). In line with its commitment to customer service, the Panama Canal will continue to provide the world with value for another century and beyond.

During today’s official inauguration ceremony, Panamanian President Juan Carlos Varela and Panama Canal Administrator and CEO Jorge L. Quijano spoke to a crowd of more than 25,000 jubilant Panamanians, Canal employees, heads of state and dignitaries from around the world, Canal customers, shipping and trade executives, and nearly 1,000 journalists. This is the first expansion of the waterway since its original construction.

“More than 100 years ago, the Panama Canal connected two oceans. Today, we connect the present and the future,” said Mr. Quijano speaking to the people of Panama. “It is an honor to announce that what we did it together: providing this great connection to the world. This is the beginning of a new era.”

“Canal users can be assured that we’ll continue to support the Panama Canal Authority and our port operators to provide them a world class service and strengthen our logistics system by creating the necessary incentives and conditions to give added value to our inter-oceanic route,” said Panamanian President Varela.