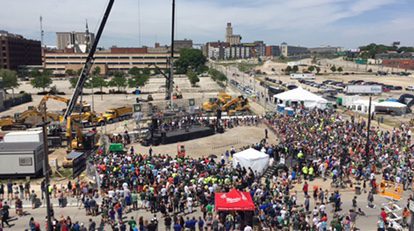 As part of the Bucks 2nd annual block party, the team officially broke ground on theMilwaukee Bucks Arena on Saturday, June 18! At the corner of 4th and Juneau, thousands of people came to participate in the activities that kicked off with the official groundbreaking ceremony.

Mike Sorge, who was recently featured in the Milwaukee Business Journal, will serve as the project director leading our Mortenson team.  Check out his profile here. The new multi-purpose arena is part of a public–private partnership between Bucks ownership and local and state government, and will be the cornerstone of a new sports and entertainment district built on 30 acres of mostly-vacant land in downtown Milwaukee.