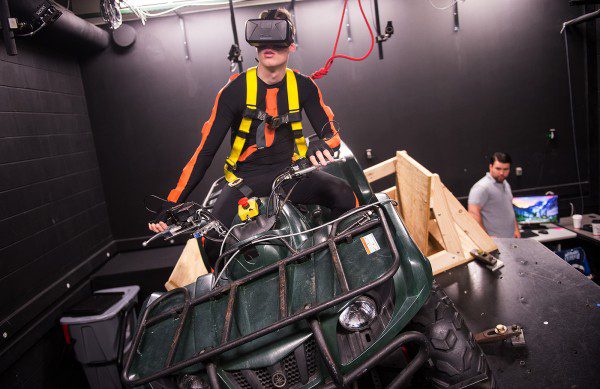 A new virtual reality simulator will help University of Iowa researchers study how and why people lose control while driving all-terrain vehicles.

In Iowa, more than 200 ATV-related crashes occur every year, sending patients to emergency departments across the state. And since January, there have been six known deaths of children in ATV-related incidents statewide, according to officials at UI Children’s Hospital.

Charles Jennissen, UI clinical professor of pediatrics and emergency medicine, says the university’s new ATV simulator will help researchers learn more about what causes ATV crashes and how they can be avoided.

“We’ve had a more basic ATV simulator, but this version is more sophisticated,” says Jennissen, a member of the UI Children’s Hospital ATV Safety Task Force. “Now we have virtual reality goggles, so the screen reflects the movements of the platform. As you turn the steering wheel, you also turn in the virtual reality environment, which makes the experience feel more realistic for research subjects.”

Developed in collaboration with researchers at the UI College of Engineering’s Center for Computer-Aided Design, the simulator features an Oculus Rift virtual reality headset, a special suit with 17 motion sensors, and a motion platform to help simulate changes in terrain. UI students Jake Michael, of Hartland, Wisconsin, a graduate student in biomedical engineering, and Kyle Losik, of Naperville, Illinois, a senior mechanical engineering major, played a major role in building the simulator and designing the virtual reality environment, with leadership from engineering faculty member Salam Rahmatalla.

Rahmatalla, whose research includes the mechanics of movement, describes the simulator as “basically a giant video game controller.” The driver’s actions—accelerating, braking, turning, etc.—are reflected in the virtual reality environment. At the same time, the simulator measures forces on the driver and the ATV, allowing researchers to monitor when the driver’s or the vehicle’s center of mass may shift and lead to a loss of control.

Jennissen says tracking movement is especially important on an ATV, which requires drivers to use their bodies to maintain control of the vehicle and to navigate obstacles such as hills and rough terrain.

The new simulator will provide a controlled, safe environment where researchers can test different types of drivers, such as experienced vs. inexperienced drivers and children vs. adult drivers. It also could serve as a training environment for emergency responders and the military, who often use off-road vehicles for rescue missions.

Safety Tips for ATV Riders
1. Always wear a helmet
2. One person at a time (no passengers)
3. Ride the right size machine
4. Always wear protective gear
5. Never ride on the road
6. Take a safety course
7. Tell someone where you are going
8. Respect private property
9. Never use drugs or alcohol
10. Always obey the rules