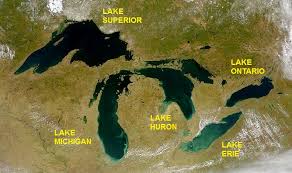 Adding carbon dioxide gas (CO2) to water, a process similar to making carbonated soda water, could help control the movement and behavior of invasive carp in the Great Lakes basin, according to a recent study.

Bighead Carp Hypophthalmichthys nobilis and Silver Carp H. molitrix are species of invasive Asian carp that threaten the Great Lakes. Scientists with the University of Illinois and U.S. Geological Survey (USGS) tested the effectiveness of infusing water with recycled CO2 gas to discourage the movement of Bighead and Silver carp. Both carp species avoided CO2-infused water in a research pond at the USGS Upper Midwest Environmental Sciences Center in La Crosse, Wisconsin.

“These fish responses provide evidence that CO2could be used as a tool to deter the movement of Bighead and Silver carp,” said Michael Donaldson, a University of Illinois researcher and the study’s lead author. “The results are encouraging because there is a need for additional methods to prevent the entry of Asian carp into the Great Lakes.”

The scientists gradually added light plumes of CO2gas throughout the USGS test pond. They monitored the behavior of individual Bighead and Silver carp, as well as the behavior of native fish species such as Bigmouth Buffalo Ictiobus cyprinellus, Channel Catfish Ictalurus punctatus, Paddlefish Polyodon spathula, and Yellow Perch Perca flavescens, before, during, and after the addition of CO2. The scientists found that:

“Further tests are needed before CO2can be used in Asian carp management,” said Jon Amberg, a USGS scientist and coauthor of the study. “Understanding the effects of long-term, elevated CO2exposure on fish and other organisms can help assess its risks to native organisms.”

The next research step is to test the usefulness of CO2gas in controlling Bigheaded Carp movement in a natural river.

Nonnative Asian carp can damage ecosystems in the Great Lakes basin by competing with native fish and mussels for food. Large Silver Carp are also hazardous to boaters because they can leap up to 10 feet out of the water when startled.

The new study is published in the journal Transactions of the American Fisheries Society.