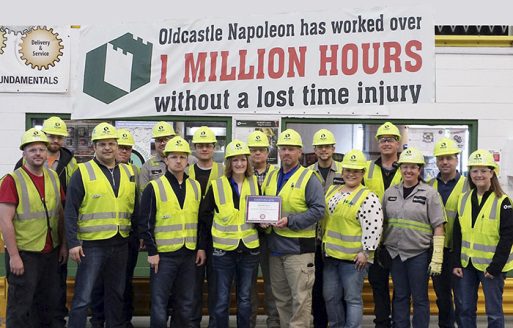 NAPOLEON, Ohio, June 2016—Oldcastle Precast announced today that its Enclosure’s Napoleon, Ohio operation has reached a major safety milestone, one million man hours with no lost days from work. Oldcastle Precast Enclosure – Napoleon’s achievement of this record occurred over a four and a half-year long period, spanning from February 1, 2011 to December 31, 2015.

The Ohio Bureau of Worker’s Compensation Safety Council presented the award certificate to Plant Manager, Patrick Masterlasco at a special awards ceremony, on April 19, 2016. The award recognized completion of over 1 million hours worked without a lost time injury.

Oldcastle Precast Enclosure – Napoleon’s priority on every job is safety and this dedication has resulted in achieving major safety milestones. The Napoleon plant worked 1,046,449 consecutive hours without a lost time accident, beginning February 1, 2011 until December 31, 2015. The one million hours, lost time free milestone, was attained on October 10, 2015.

“It is obvious that commitment to safety by our employees and management is what it takes to reach a goal such as this. This accomplishment is no accident, but the direct result of the company’s commitment to safety, extensive employee involvement, and accountability. The most important point has always been to provide a safe environment for our team. We are striving to make every single operation as safe as possible and that’s why each individual goes to work with the best safety equipment and training,” said Plant Manager Patrick Masterlasco.

Congratulations to Oldcastle Precast Enclosures-Napoleon for this outstanding achievement.

At a special luncheon on April 26, 2016, the Napoleon plant celebrated their achievement and enjoyed a catered meal recognizing their safety efforts.

Oldcastle Precast believes that safety is not just a set of rules and regulations to be followed, but is a promise that the corporation makes to its employees. This accomplishment is a true commitment to work and live safely.

Oldcastle Precast is the clear choice for building products and services for North American Infrastructure projects. The company is a leading provider of engineered product solutions nationwide to a number of market sectors including:  Energy, Communications, Water, Transportation, and Building Structures.