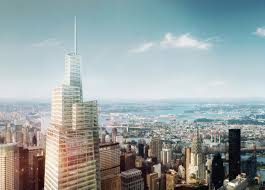 One Vanderbilt will stand directly adjacent to Grand Central Terminal, which is one of the busiest rail stations in the world. The 58-story building will include 1.6 million square feet of Class A commercial space, a public transit hall at the base of the building connected to a 14,000 square foot public plaza, and US$220 million of public transit improvements to the Grand Central transit hub. When One Vanderbilt is completed, it is expected to be the second-tallest office tower in New York City — making Tishman the builder for the two tallest office towers in New York City, including One World Trade Center, the tallest building in the Western Hemisphere.

“As the quintessential New York builder, we are proud that SL Green is entrusting us to build this iconic structure that will help reshape the skyline,” said Michael S. Burke, chairman and chief executive officer of AECOM. “We are excited to extend our expertise in delivering the highest-performance buildings as part of the dramatic transformation underway in Midtown East, one of the premier business districts in the world.”

The building is designed to pay homage to the landmarked Terminal and fit seamlessly into the skyline with the Chrysler Building, its neighbor only one block away. It is also expected to be LEED v4 Gold Certified, indicating that it will be built with sustainability in mind. The total value of construction for the project is approximately US$1 billion.

Primary construction is scheduled to begin in 2016 and is expected to be completed in 2020.

AECOM is built to deliver a better world. We design, build, finance and operate infrastructure assets for governments, businesses and organizations in more than 150 countries. As a fully integrated firm, we connect knowledge and experience across our global network of experts to help clients solve their most complex challenges. From high-performance buildings and infrastructure, to resilient communities and environments, to stable and secure nations, our work is transformative, differentiated and vital. AFortune 500 firm, AECOM had revenue of approximately $18 billion during fiscal year 2015. See how we deliver what others can only imagine at aecom.com and @AECOM.