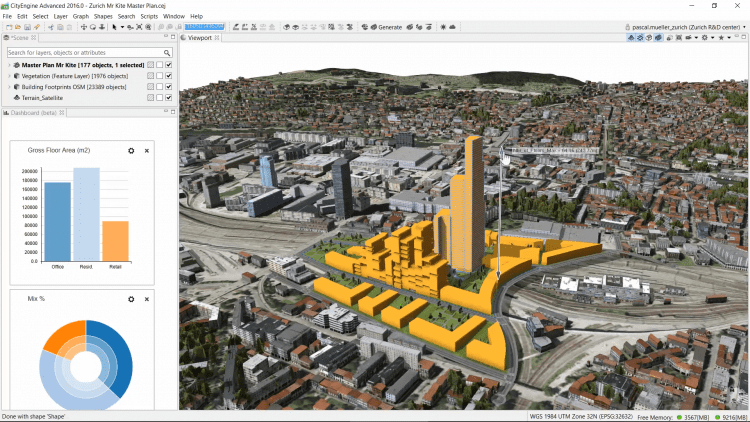 Redlands, Calif., June 21, 2016—Esri, the global leader in geographic information system solutions today announced the release of CityEngine 2016. The revolutionary modeling technology allows GIS professionals, 3D artists, architects and urban planners to create smart 3D city models in a matter of minutes. With just a few clicks, the new “Get Map Data” interface will import satellite imagery, 3D terrain and street data from any city in the world. What was once a very complicated, and time-intensive process now can be done quickly and simply.

“This release integrates CityEngine with Esri’s powerful ArcGIS platform”, said Pascal Mueller, director of the Esri R&D Center, Zurich. “We created a simple way to import real-world elevation and base maps from ArcGIS Online. We have also introduced support for Esri’s new 3D streaming services with scene layer packages (SPKs). Scene layers can be hosted in the cloud and viewed using the ArcGIS Scene Viewer, a browser-based application for viewing 3D content at any scale and with unlimited extent.”

Another highly requested feature to CityEngine 2016 is the Alembic exporter. The Alembic format is used by visual effects and animation professionals, and is well suited for handling massive 3D models. It is now possible to batch generate tens of thousands of building geometries at the highest level of detail and visualize them in a renderer without the need for a complicated production pipeline.

CityEngine 2016 is available for Windows, Mac, and Linux platforms. A free 30-day trial with full export capabilities can be downloaded at esri.com/cityengine