/ Buildings / Plant Prefab to Launch at Dwell on Design 2016

Plant Prefab to Launch at Dwell on Design 2016 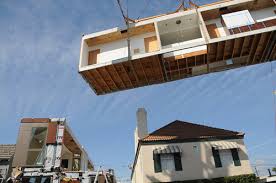 June 24, 2016—Plant Prefab, a new home prefabricator and construction company, will debut at this year’s Dwell on Design Los Angeles, the nation’s largest design event, taking place June 24th-26th. Plant Prefab will celebrate its launch with the unveiling of a new two-story LivingHome, the CK4.2, which will serve as the official showhome for Dwell on Design.

Based on the need for more affordable and sustainable home construction in the growing urban infill market, Plant Prefab will operate as the first factory in the nation dedicated to sustainable construction materials, processes and operations. Plant will manufacture custom single and multi-family homes that are high quality, healthy, and durable. By building off-site with full-time staff, Plant will deliver low cost homes in half the time and with less waste than traditional site-based general contractors. Plant is targeting individuals, developers and architects who want a more reliable, time saving, and cost efficient solution for the custom homes they have designed or want to build.

Plant Prefab is an off-shoot of LivingHomes, which launched in 2006, as a design and development company focused on modern, sustainable, prefabricated homes. Since then, LivingHomes has garnered significant industry recognition, including the nation’s first LEED Platinum certification for a home, AIAs, top sustainable award, and Businessweek’s “Top 10 Architectural Wonders of the World”.

Plant is led by a seasoned team of prefabrication, design, and technology executives. Plant CEO, Steve Glenn, has founded or been part of the founding team at companies that have risen over $1B in financing. Bill Talbott, Plant’s General Manager, has overseen the construction of over 12,000 homes. Obvious Ventures, the venture fund founded by Ev Williams, led the Series A round with a $3M investment in Plant Prefab. The world-positive venture firm was joined by additional seasoned angel investors.

Plant Prefab and LivingHomes founder Steve Glenn, explains, “Plant Prefab was created to address an extremely large and growing market opportunity – the urban infill market – and it leverages the vast amount of knowledge we’ve acquired in the ten years since we started LivingHomes. Our mission is to make it easy, fast, and cost effective for people to build custom, high quality homes that are durable, environmentally responsible and healthy.”

Plant’s first project, the CK4.2, a new model for LivingHomes, is 1,700 square feet with three-bedrooms and three-bathrooms, and will debut at Dwell on Design. The CK4.2 will be the first ever two-story home installed at the show. A press preview will take place Friday June 24th at 8:30a.m. at Dwell on Design Los Angeles, with a special introduction by Steve Glenn. Like almost all LivingHomes, the home was built to a LEED Platinum, environmental standard. It will be permanently installed at a site in Hollywood following Dwell on Design.

Plant Prefab’s factory, at 61,000 square feet, is located in Rialto, California. Unlike most traditional prefabricators which are focused on standard, low cost, non-sustainable homes, such as mobile homes, Plant Prefab is specially organized for the production of high quality, custom homes based on designs provided by clients and their architects. In addition, the company is developing a patented building system that will dramatically reduce the cost and complexity of custom construction. The factory pays living wages to its workers in a region of higher unemployment and is focused on developing worker skills in the green building sector. In addition to employing sustainable and non-toxic materials and systems, the company reduces the ecological footprint of its operations through super energy efficient construction equipment and building processes.

LivingHomes, livinghomes.net, is a designer and developer of modern, prefabricated homes that combine world-class architecture with an unparalleled commitment to healthy and sustainable construction. The first LivingHome, designed by Ray Kappe, FAIA, was installed in eight hours. It became the first home ever to receive a LEED for Home Platinum rating. Eighteen LivingHomes have been certified LEED Platinum and one LEED Gold, making the company one of the most experienced designers of homes at the highest level of LEED certification. LivingHomes have garnered significant industry recognition including the AIA’s top sustainable award, Green Builder Magazine’s Home of Year, Business 2.0 “World’s 11 Coolest Products”, and Businessweek’s “Architectural Wonders of the World.” LivingHomes are available in standard or customized configurations to builders, developers and individuals. In addition to design, LivingHomes is developing affordable housing communities for Make It Right, at the Ft. Peck Indian Reservation in Montana and for an East LA Community Corporation project in Los Angeles, and for its own project in Atwater Village, Los Angeles.