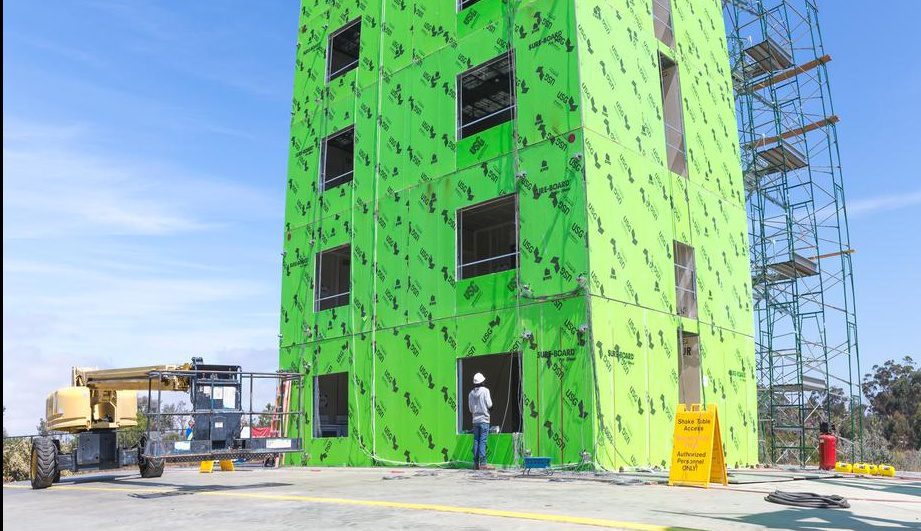 San Diego, Calif., June 13, 2016—A team of engineers is testing a six-story, lightweight steel-frame building on the world’s largest outdoor seismic shake table this month at the University of California San Diego. The goal is to better understand how cold-formed steel structures withstand earthquakes and the fires that may follow. This is the tallest cold-formed steel-frame structure to ever undergo tests on a shake table.

The engineers, led by UC San Diego Professors Tara Hutchinson and Gil Hegemier, from the Center for Extreme Events Research at the Jacobs School of Engineering at UC San Diego, will put the six-story building through a series of increasingly intense earthquake simulations. Then researchers from Worcester Polytechnic Institute will test the building’s performance during a live fire. During both series of tests, UC San Diego researchers will fly small drones in and around the building to map the structure and assess damage.

The $1.5 million project, which includes three weeks of testing, is supported by a coalition of government agencies, foundations and industry partners including the U.S. Department of Housing and Urban Development, the California Seismic Safety Commission and partners from the steel industry and insurance companies. The researchers received approximately $1 million in in-kind donations from industry partners to build and outfit the structure.

“The California Seismic Safety Commission is charged with supporting research and education that improves the safety of the citizens of The State in the event of an earthquake.  We were happy to support this innovative research studying how this type of construction, in increased use in California, can be made safer in the case of an earthquake or fire.  This testing sequence illustrates how applying cost-effective partnerships effectively and new technologies such as drones and remote sensing can help reduce the earthquake risk to people and property” said Commission Director Richard McCarthy.

Researchers have installed more than 250 sensors, over 40 video cameras, and a GPS system provided by the Orbit and Permanent Array Center at UC San Diego’s Scripps Institution of Oceanography, to gather data during the tests. Some sensors are sensitive enough to detect movements caused by the wind.

“What we are doing is the equivalent of giving the building an EKG to see how it performs after an earthquake and a post-earthquake fire,” said principal investigator Hutchinson.

Hutchinson and her team want to see how a six-story building made from lightweight steel performs during and after a temblor. She and colleagues believe it will fare well, in part because it’s lighter than a concrete building of the same height and as a result has less mass to generate damaging forces.  At the end of the testing, the building will be subjected to a simulated earthquake that is stronger than what the structure was designed to withstand, in an effort to better understand how it might fail and to validate computer models of structural response that can be used to predict performance during different earthquakes. The building’s architectural layout is designed to replicate a multi-family residential structure. But in this case researchers are pushing the limit of structural height, erecting the building 64 feet above the shake table platen. The largest building of this construction type tested before today on a shake table was a two-story residential structure in 2013.

During the seismic testing part of the project, the building will undergo a series of temblors of increasing intensity. Simulations will include motions recorded during the 1994, 6.7-magnitude Northridge earthquake; the 1992, 7.2-magnitude Cape Mendocino Earthquake–both of which occurred in California; and the 8.8-magnitude earthquake that took place in 2010 in Maule, Chile.

Live fire tests will take place after seismic testing. Researchers led by Brian Meacham, a professor at the Worcester Polytechnic Institute, will ignite pans of heptane, a liquid fuel, in eight rooms on the building’s second and sixth floor to achieve temperatures as high as 1000 degrees Celsius —almost 2000 degrees Fahrenheit, within the seismically damaged rooms. Using temperature probes and video cameras, the researchers will assess how damage from the simulated earthquakes will affect the ability of the passive fire protection systems to contain fires and prevent the spread of smoke.

Falko Kuester, a structural engineering professor in the Jacobs School, will deploy unmanned aerial vehicles (UAVs) during both the seismic and fire testing to create a 3D model and video of observed damage. Data from the fire tests will allow the researchers to capture the thermal profile of the building. This effort aims to determine whether drones equipped with heat-detection cameras could be used to find survivors and assess damage after earthquakes and the fires that often follow them.

The building is also equipped with appliances, such as water heaters and stoves that could potentially ignite a fire if they move excessively during an earthquake. State Farm Insurance and the Insurance Institute for Business and Home Safety provided funding to place these appliances, both braced and unbraced, throughout the structure. Researchers are hoping to evaluate which restraint system is most effective during an earthquake. State Farm also has installed a smart device in the building that detects seismic waves. When the waves reach a certain threshold, the device is designed to shut down services to a residence before the worst of the earthquake hits.

• This is the first time that seismic tests will focus on a six-story structure built of cold-formed steel (CFS).  The building, which is taller than most structures that use CFS, will include some non-structural components, including doors and windows. The exterior of the building is complete with sheetrock cladding as well as CFS door and window frames, each commonly used in residential construction.

• This is the first time that a CFS building of this size will undergo fire testing after being put through a series of simulated seismic events.

• This is the first time that UAVs will be used to map a building of this type and then be used to do multi-spectral imaging to assess the impacts of seismic and fire damage.

Industry and government partners supporting this effort may be found at: