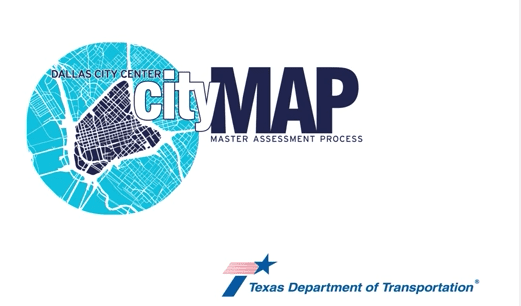 DALLAS, June 10, 2016—The Texas Department of Transportation, along with the City of Dallas and Dallas County, has released the results of its Dallas City Center Master Assessment Process (Dallas CityMAP). The goal of the 15-month study was aimed at assessing major urban interstate corridors immediately surrounding and entering the urban core of Dallas and how they can best integrate with the future vision of Dallas.

“HNTB was thrilled to be a part of this groundbreaking opportunity that will help shape the City of Dallas and how it connects citizens and infrastructure in the future,” said Mike Hegarty, PE, HNTB Dallas office leader and vice president. “By working closely with a variety of stakeholders and engaging the public, we have set a new standard for the role of holistic urban design and stakeholder engagement in shaping the future of urban transportation infrastructure that can be modeled around the country.”

HNTB led a multi-disciplinary team of consultants for TxDOT to deliver the CityMAP process. This included implementing a public engagement process that included conducting more than 80 one-on-one interviews with key stakeholders as well as organizing multiple public workshops and the creation of a website outlining the CityMAP process (www.dallascitymap.com).

“CityMAP is the result of an unprecedented effort by TxDOT to gather public input about the future of downtown Dallas corridors and to lay out the ‘art of the possible’ even before any formal studies are started,” said Dallas Mayor Mike Rawlings. “An effort of this scale and scope has never been attempted before. In particular, I hope that it provides the impetus to reconnect southern Dallas neighborhoods that have been divided by poor transportation decisions in years past. It is time to rectify those divisions.”

HNTB provided scenarios exploring the “art of the possible” for future Dallas highway infrastructure with associated development opportunities to show how and where TxDOT, the City of Dallas, Dallas County and other stakeholders could direct monetary resources in order to make the freeway system a more functional part of the urban fabric and to create a more livable 21st century city for Dallas’ rapidly growing urban population.

“CityMAP was about people, process and product,” said Texas Transportation Commissioner Victor Vandergriff. “HNTB’s James Frye, Brandi Crawford and Dan Chapman led this extraordinary work and did so under intense pressure. They had to capture all of the competing interests and roads and we’re incredibly grateful for their work.”

Dallas CityMAP will ultimately be used to deliver key scenario alternatives for the development of future transportation and public and private infrastructure improving city connectivity and to evaluate funding priorities for TxDOT, the city and their partners.

“I want to commend TxDOT in its new approach to operating in the urban environment,” said Dallas City Council Member Lee Kleinman. “This is not just about mobility through urban areas, but about how transportation can spur economic development, social equity and so much more.”

The project also will be used to help identify and guide future transportation, urban design, environmental planning and policy decisions by local, state and federal elected officials and other decision makers responsible for these corridors running through and around the urban core of Dallas.

“It has been an honor to work with TxDOT’s leadership and staff at all levels, the City of Dallas political leadership and staff and various stakeholders to gain input and help create a unique and innovative process to deliver a vision for the City’s urban corridors,” said James Frye, HNTB vice president and landscape architect. “We believe Dallas CityMAP responds directly to a wide variety of requests made by partner agencies, stakeholders and Dallas residents, and will help guide decision makers in deciding the future of Dallas’ urban freeway corridors through an open and  comprehensive approach.”

About HNTB
Named 2015 Design Firm of the Year by ENR Texas & Louisiana, HNTB Corporation is an employee-owned infrastructure solutions firm serving public and private owners and construction contractors. With more than a century of service in the United States and Texas, HNTB continues to grow in size and service offerings to clients from nine office locations, currently employing approximately 400 full-time professionals in the state. HNTB understands the life cycle of infrastructure and addresses clients’ most complex technical, financial and operational challenges. Professionals nationwide deliver a full range of infrastructure-related services, including award-winning planning, design, program management and construction management. For more information, visit www.hntb.com.