US Department of Transportation Adds AT&T to Smart City Challenge 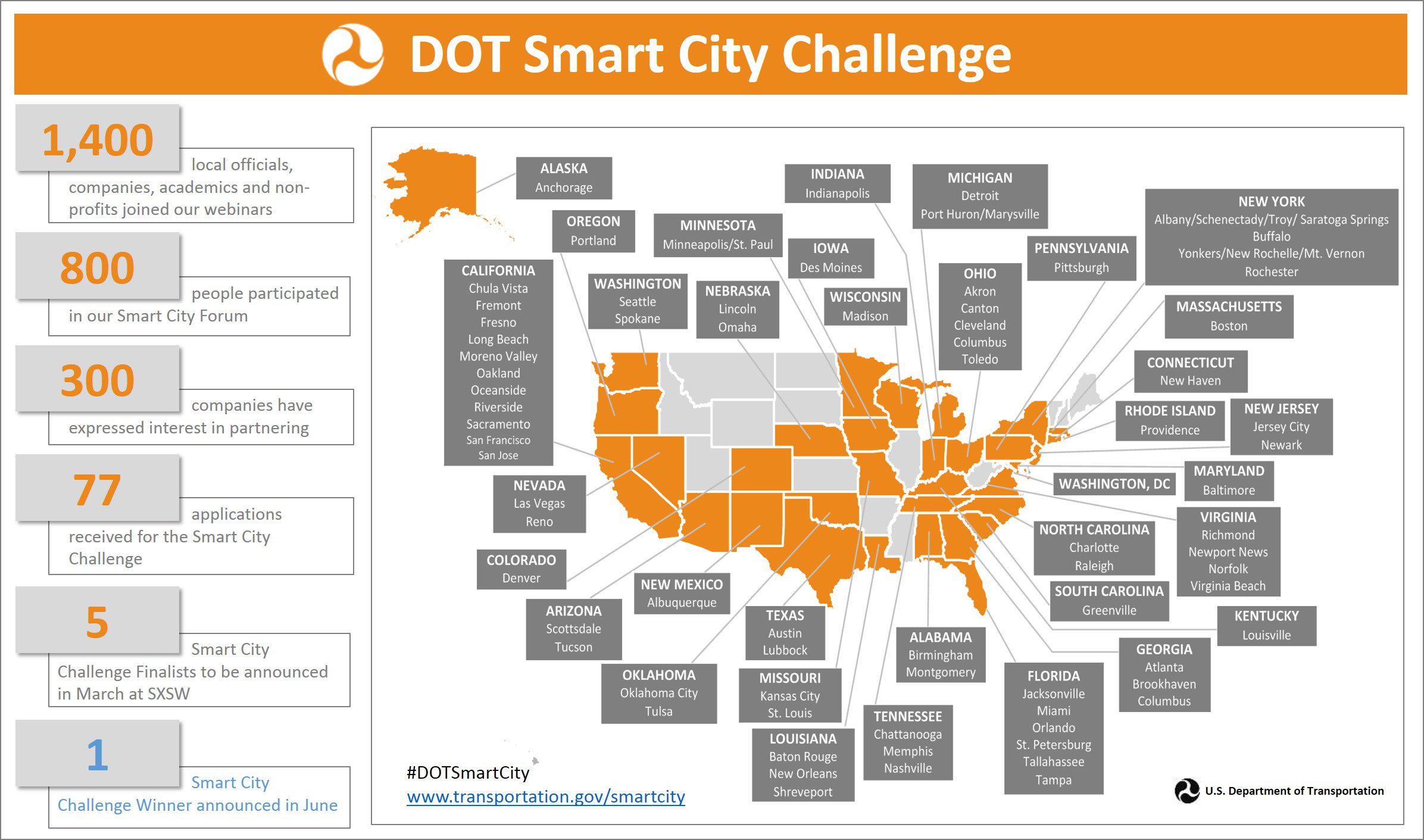 WASHINGTON – U.S. Transportation Secretary Anthony Foxx today announced that AT&T has become the newest strategic partner in the U.S. Department of Transportation (USDOT)’s Smart City Challenge. The Smart City Challenge is a competition which will create a fully integrated, first-of-its-kind city that uses data, technology and creativity to shape how people and goods move in the future. AT&T will provide the winning city access to up to $1 million in hardware, products, and/or services to support the development and deployment of smart city solutions in their city.

As a provider of Internet of Things (IoT) solutions, AT&T is prepared to equip the winner with connectivity services – cellular, Wi-Fi and wireline – as well as an array of products and solutions such as IoT security consulting and big data analytics for traffic modeling and forecasting.  The winning city also could choose to have AT&T host and manage a hackathon in their city for developers or host a DevLab that will allow city IT employees and other stakeholders to receive training on cutting-edge app development and coding practices that will aid in their smart city deployment.

For the cities that do not win, AT&T will continue to work with them on strategies to help them move their visions forward.

This new partnership announcement comes on the same day that mayors from each of the seven finalist cities (Portland, Kansas City, Columbus, San Francisco, Denver, Austin, and Pittsburgh) participate in the Smart City Challenge Final Pitch. This event will provide each mayor with a final opportunity to share their vision for the future of transportation in their city.

USDOT has been working with each city to connect them with private, public and non-profit partnerships that support their final proposals with technical assistance. In addition to AT&T, other partners that have joined the Smart City Challenge include: launch partner Paul G. Allen’s Vulcan Inc., cloud partner Amazon Web Services, Mobileye, Autodesk, Alphabet’s Sidewalk Labs, and NXP.

“The Department is incredibly excited about this new partnership with yet another innovative company, which further exemplifies the excitement that this Challenge is generating nationwide,” said U.S. Transportation Secretary Anthony Foxx. “The finalist cities have proposed incredibly bold vision for the future of their transportation systems. I’m confident that with the aid of the cutting-edge technologies and tools being offered by our partners, each city will be successful in bringing their inspiring plan to life.”

“Joining the Smart City Challenge is another way we’re working to promote and drive adoption of smart city solutions,” said Mike Zeto, general manager and executive director, AT&T Smart Cities.  “We recognize that each of the contest finalists has a unique vision for how they want to transform their city’s transportation network, which is why we’ll be working with the winner to help them select the services and solutions they need AT&T to provide so they can build the smart city of their dreams.”

The Smart City Challenge was launched by Secretary Foxx in December in response to the trends identified in the Beyond Traffic draft report. The report, issued last year, revealed that our nation’s aging infrastructure is not equipped to deal with a dramatically growing population in regions throughout the country.  It also identified a need to increase mobility options in developing megaregions – specifically mid-sized cities.