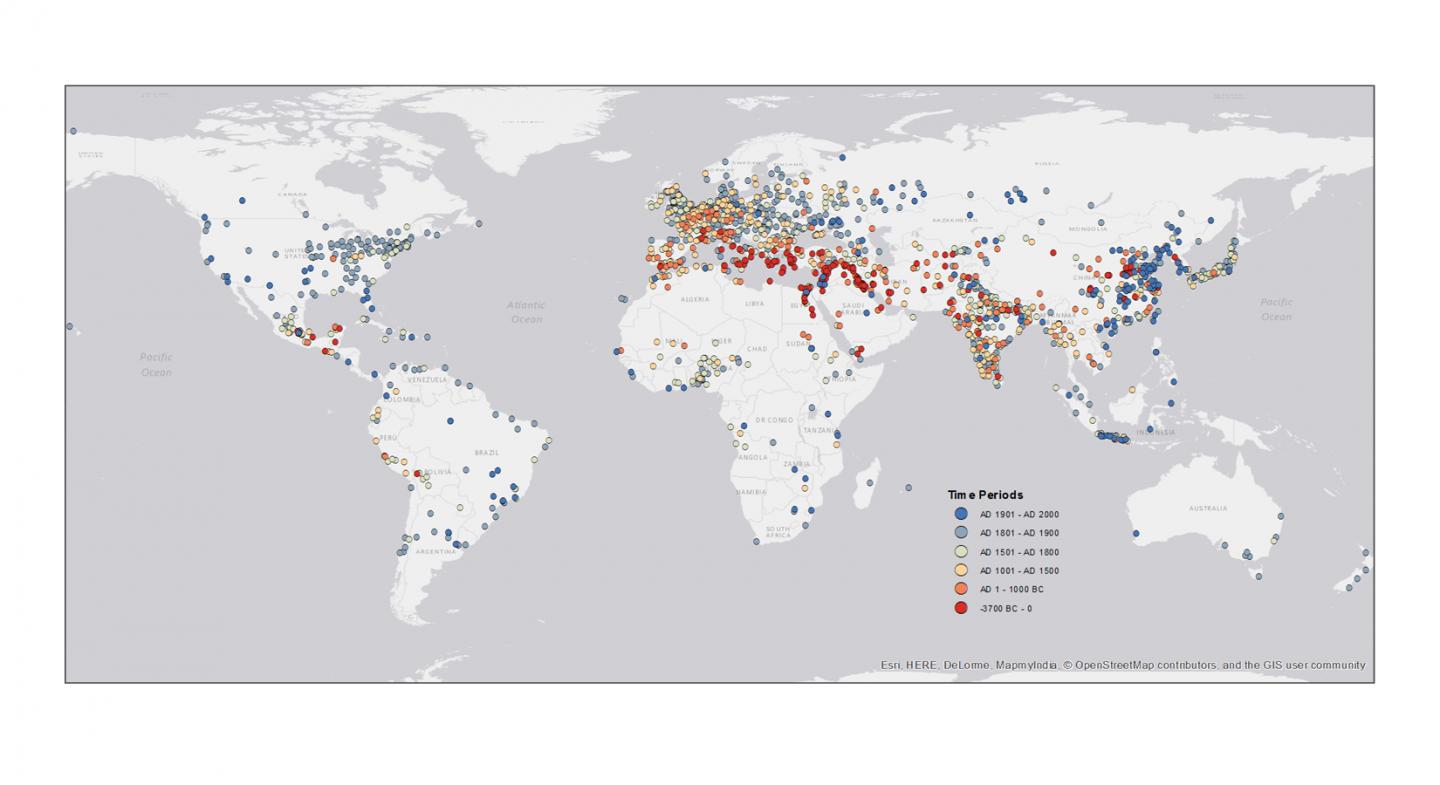 As the growth of cities worldwide transforms humans into an “urban species,” many scholars question the sustainability of modern urbanization. But in reality there aren’t much data on long-term historical urbanization trends and patterns.

A new Yale-led study offers fresh clarity on these historical trends, providing the first spatially explicit dataset of the location and size of urban settlements globally over the past 6,000 years.

By creating maps through digitizing, transcribing, and geocoding a deep trove of historical, archaeological, and census-based urban population data previously available only in tabular form, the authors make accessible information on urban centers from 3700 B.C. to A.D. 2000.

They also create a “reliability ranking” for each geocoded location to assess the geographic uncertainty of each data point.

Their findings are published in the journal Scientific Data.

“To better understand urbanization today it is helpful to know what urbanization looked like through history,” said Meredith Reba, a Research Associate at the Yale School of Forestry & Environmental Studies (F&ES) and lead author of the paper. “By understanding how cities have grown and changed over time, throughout history, it might tell us something useful about how they are changing today.”

Other contributors are Karen Seto, a Professor of Geography and Urbanization Science at F&ES, and Femke Reitsma, a Senior Lecturer in Geographical Information Systems at the University of Canterbury in New Zealand.

The findings have broad applications. The dataset offers an important first step toward understanding the geographic distribution of urban populations throughout history and across the world.

Currently the only spatially explicit data available at a global scale is the United Nations World Urbanization Prospects, which provides population values, latitudes, and longitudes for places with populations of 300,000 or more. However, this resource goes back only to 1950.

For their dataset, the authors draw on two principle sources: Four Thousand Years of Urban Growth: A Historical Census (1987), by historian Tertius Chandler, which estimated the city-level populations from 2250 B.C. to 1975; and World Cities: -3,000 to 2,000 (2003), by political scientist George Modelski, which documents the world’s most important cities during three eras of history (ancient, classical, and modern). Modelski was able to extend Chandler’s work by 1,475 years by using archaeological site assessments and population-density estimates.

Although both books are cited regularly by scholars, they are neither widely accessible nor easy to use since the data are not available in digital format. The new dataset, which is digitized and easily accessible, makes the historical information available for examination by other researchers, including geographers, historians, archaeologists, and ecologists.

The dataset allows researchers to map and visualize city level population changes through time. For example, Istanbul, Turkey (previously known as Constantinople) underwent a major period of population decline between AD 1057 and AD 1453. During this time the population dropped from approximately 300,000 to 45,000 due to a series of events including a city sacking by the Crusaders and a bout with the plague.

According to the authors, the ability to pinpoint the size and location of human populations over time will help researchers understand the evolving characteristics of the human species — particularly human interactions with the environment.

“We see this as just a starting point onto which others can add and develop into a larger record on historical population trends,” Reba said.