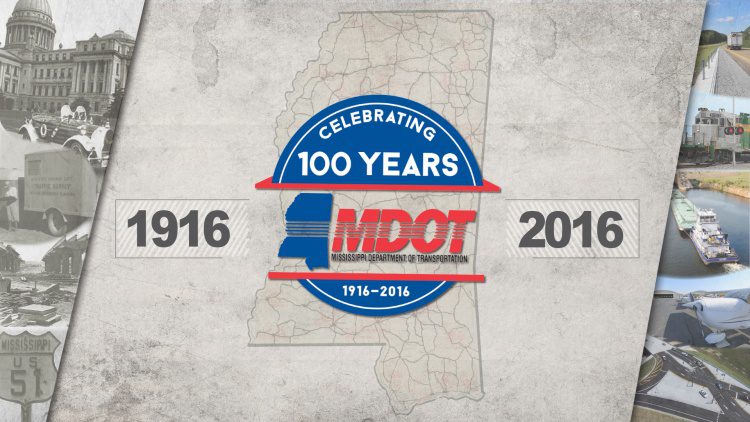 JACKSON, MISS.—The Mississippi Department of Transportation (MDOT) began its second century of service to the people of the state on March 29, 2016, one hundred years after the Mississippi Legislature created the Mississippi State Highway Commission in 1916. MDOT will be celebrating throughout the year while recognizing major milestones that shaped the state’s transportation history.

President Dwight D. Eisenhower considered the country’s interstate system one of the most important achievements of his two terms in office. Every American citizen has been touched by the interstate highway system in some way. Even those that do not drive have likely bought an item that was delivered via interstate highway.

Eisenhower’s support of an interstate highway system came as a direct result of his experiences in 1919 as a participant in the U.S. Army’s first transcontinental motor convoy on the historic Lincoln Highway, which was one of the earliest transcontinental highways for automobiles across the country. Traveling from Washington, D.C., to San Francisco, Calif., it was this trek that made Eisenhower realize the value of good highways. Part of the reason for the transcontinental motor convoy was to show the need for a system of highways and federal aid. Eisenhower and a friend heard about the convoy and volunteered to go along as observers. From mechanical difficulties to hazardous weather conditions, the convoy experienced all of the many woes that come with a long, grueling travel experience. After 62 days on the road, once the convoy finally reached San Francisco, they were greeted with medals and a parade.

Another experience that shaped Eisenhower’s views on a highway system came during World War II, when he saw the advantages Germany had from the Autobahn network. He also noted the enhanced mobility of the allies when they fought their way into Germany. Although this idea of a national highway system was important to him, during his first year in office, the President was preoccupied with bringing an end to the war in Korea while helping the country get through the economic disruption of the post-war period. There was no time to focus on designing and implementing America’s highway system.

In the following years, while focusing on concerns of national security and economic prosperity, Eisenhower made the reality of a highway system a priority of his administration. To support his views, he expressed the need of a national highway system for traffic safety, national defense, economic opportunities and travel convenience. Finally, on June 29, Eisenhower signed the Federal Aid Highway Act of 1956 into law.

Also known as the National Interstate and Defense Highways Act, the law not only piloted the interstate highway era in America, but breathed new life into Mississippi’s interstate system. It allowed the federal government to provide 90 percent of funds necessary for the construction of interstates. Soon, there were interstate projects underway, connecting Mississippi’s most northern edge to the Louisiana border and the Mississippi River to the Alabama state line. The Highway Trust Fund was established as a bank for federal monies which were obtained from certain federal road taxes on fuel, tires and other items.

Two years later, a $4 million bond issue was authorized by the Legislature for the purchase of Natchez Trace rights-of-way. By 1962, interstate funds were distributed equally according to need in the north, central and southern highway districts. Interstates 55, 20, 59, 220 and 10 were born using federal and local funds to create the foundation for the interstate system used today.

With completion of the cross-country highway system, the journey that once took Eisenhower’s convoy two months has been cut down to a matter of days. Similarly, in Mississippi, motorists can travel from town to town in a matter of hours due to the state’s interstate highway system, which continues to evolve today.  In 2015, expansion of the state’s interstate system came with Interstate 269 in North Mississippi, MDOT’s largest construction project to date. Once complete, I-269 will form a 30-mile loop around Memphis through Mississippi and Tennessee while relieving traffic pressure on the Interstate 55/69 corridor and connecting Interstate 40 and 55 in North Mississippi. While Interstate 40 is a major cross-country freight route, once completed, Interstate 69 will be an international connector between Canada and Mexico.

Since the Federal Aid Highway Act of 1956 passed, Mississippi’s transportation infrastructure has evolved considerably. In recent years, MDOT has made great progress in creating a safe and efficient transportation system with the resources available. Due to funding challenges, MDOT continues to focus financial resources on preserving the state’s infrastructure instead of adding new capacity. To sustain future economic growth, MDOT will continue to find innovative solutions to ensure the preservation of the state’s transportation network.