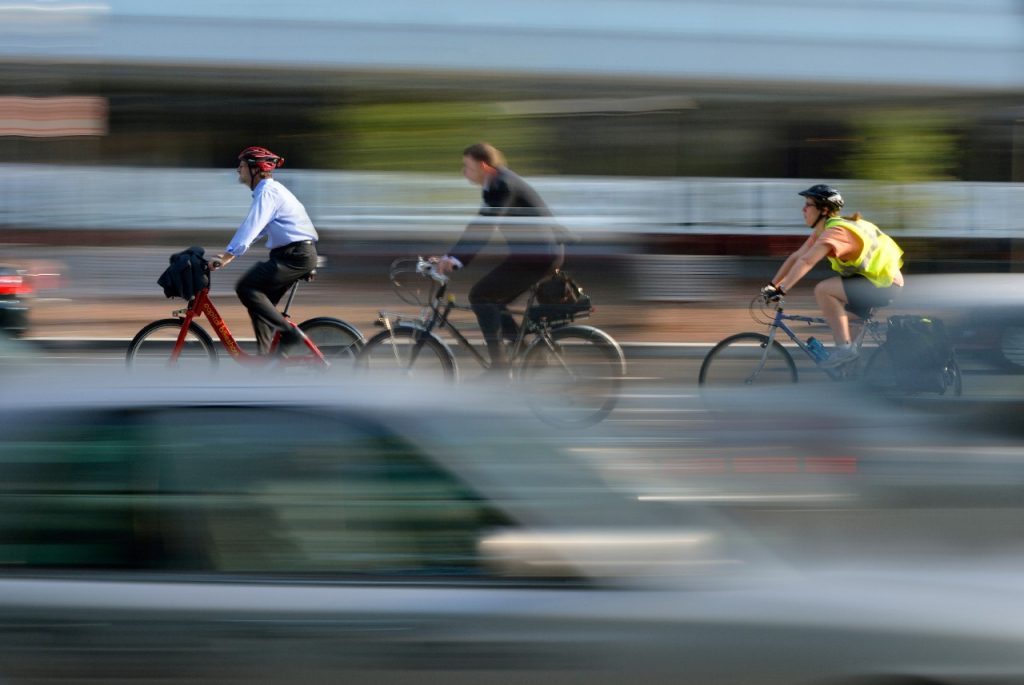 A Virginia Tech research team charged with studying the bicycle infrastructure in the Foggy Bottom-Farragut area of Washington, D.C., has recommended adding two dedicated bike lanes to Pennsylvania Avenue by reducing the six-lane divided road to a four-lane divided road.

The District Department of Transportation approached Virginia Tech to study ways to increase cycling in that area. The change to Pennsylvania Avenue is one of several suggestions from a team of six graduate students working in an environmental planning studio led by Associate Professor of Urban Affairs and Planning Ralph Buehler. The team members recently presented initial findings at the Think Bike Workshop, hosted by the Dutch Embassy and the U.S. Department of Transportation in Washington, D.C.

Since 1990, Washington has greatly increased the number of residents commuting to work by bicycle and improved its cycling infrastructure, establishing more than 56 miles of trails, 69 miles of bike lanes, and six miles of cycle tracks. The city continues to promote cycling as a sustainable method of transportation throughout the city. However, as the study confirms, bicycle infrastructure in the Foggy Bottom-Farragut area, which mixes residential, commercial, and institutional uses, remains scarce.

The Virginia Tech team was tasked with assessing the cycle-friendliness of the neighborhood, analyzing who travels within it, and determining what infrastructure improvements there would encourage more cycling.

The team evaluated six area roadways. Field reviews found that while personal bike parking and Capital Bikeshare stations are available, the infrastructure on the evaluated streets is limited. A crash analysis of the area revealed that a total of 194 crashes had occurred within the project area between January 2010 and June 2015 with no fatalities. Survey results showed a consensus that the study area does not have adequate infrastructure for cycling. Most respondents agreed that cycling does not feel safe in the study area.

Overall, the results indicate that, to encourage more cycling, infrastructure such as protected or separated bike lanes is needed, particularly for individuals who currently classify themselves as interested in cycling, but concerned about doing it.

Ralph Buehler and his students have completed other studies the D.C. area in recent years, including the Economic Benefits of Capital Bikeshare: A Focus on Users and Businesses and Trends and Determinants of Cycling the Washington, D.C., Region.

Buehler and co-editor John Pucher have also released the book “City Cycling,” which describes way to make cycling more accessible to all types of people as a viable transportation option.