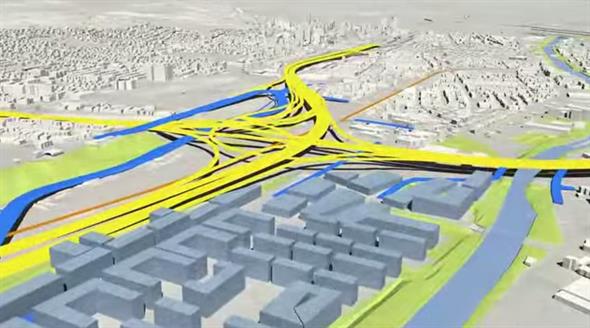 Luckily, projects like Montreal’s Turcot Interchange don’t need to suffer the same fate, thanks to a new modelling method developed by researchers at Concordia University in Montreal, and described in a recent study in Automation in Construction.

The method is designed to help those projects come in on time and on budget.

Amin Hammad, a professor in Concordia’s Institute for Information Systems Engineering and the study’s senior author, explains that scheduling reconstruction work demands a high level of coordination between different workflows.

“Any delay in the work on one segment might impact the work on another, which ultimately results in delaying the whole project and augmenting the cost,” he says. “The simulation methods we’ve developed help contractors analyze the schedule and eliminate the risks.”

A four-dimensional approach
Reconstructing heavily used highways like the Turcot — the biggest road construction project in the history of Quebec, with an estimated budget of about $4 billion — is an extremely complex process because of the need to maintain traffic flow.
Demolishing the existing interchange and then replacing it is not an option. Instead, a plan is required to gradually shift the traffic from the existing segments to the newly built ones.

“This parallel coordination of construction and demolition activities with traffic flow is essential to the success of these projects,” says Hammad. “That’s why our new modelling method uses a 4-D approach — taking into account the three normal space axes, plus time, to coordinate the traffic phasing with the demolition and construction of the old and new segments, respectively.”

This method is the first to integrate stochastic simulation techniques — algorithms to predict randomness — with 3-D modelling of highways to generate 4-D representations that can be used to detect and plan for scheduling clashes, and define the feasible sequences in which the segments of the highway bridges can be constructed or demolished.

“This study allows decision makers to better schedule construction and demolition activities to avoid any conflicts that may delay the project and increase the cost,” says Hammad.

For Montrealers, who are expecting to deal with Turcot-caused delays through to 2020 at the earliest, this research could save huge amounts of time and money.