Study Looks at Bacteria to Remove Metals From Mine-Impacted Water 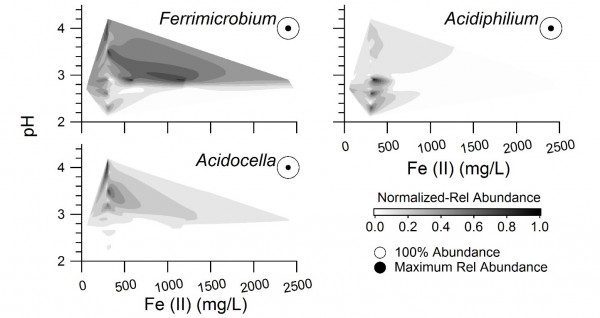 UNIVERSITY PARK, Pa. — Researchers at Penn State are refining a natural, low-cost process that will help remove some of the most abundant pollutants, such as iron, from mine-contaminated water.

“In this study we researched how quickly ferrous iron was oxidized under set conditions and found out what microbial species lived under these different conditions,” said Bill Burgos, professor of environmental engineering at Penn State. “It’s not only important to know how fast a particular treatment process might be but also which microbes are involved.”

The team enriched iron-oxidizing bacteria from two acid mine drainage sites in Pennsylvania’s Appalachian coal basin and then measured the rates of iron oxidation at low-pH values.

At each site, the researchers first collected acid mine drainage and surface sediments to be used as “seed” material for microbial enrichments.

“The sediment is the freshly deposited iron oxides that are classically indicative of mine drainage,” Burgos said. “The sediments at Scalp Level hosted a different microbial community than the sediments at Brubaker Run.”

Once in the lab, microbes were extracted from the sediment samples and then enriched using a no-flow, fed-batch bioreactor where ferrous iron was intermittently added to enhance the growth of iron-oxidizing bacteria.

After enrichment, each culture was divided for two sets of experiments, one that varied the pH and another that varied the iron concentration. Using the four reactors (two per site), the researchers measured rates of iron oxidation under different conditions, then compared DNA extracted from biomass samples, noting changes to microbial communities.

“The flow-through experiments allowed us to mimic an engineered bioreactor,” Burgos said.

The results of these experiments, recently published in Applied and Environmental Microbiology, showed that different microbial communities enriched from the two sites maintained distinct traits inherited from their respective seed materials. Long-term operation of these two systems did not lead to the same, or even more similar, microbial communities.

However, all of the bioreactors did oxidize iron and remove it at very similar rates. This suggests that the performance of bioreactors for mine-water treatment may not be strongly dependent on the “microbial seed” used for reactor startup.

“It is a sequential process,” Burgos said. “Each microbial community is acting as seeds for the next stage. Importantly, the rates of iron oxidation were essentially the same for the two sites, even though they varied dramatically in the field. What that means is you could go to any site and enrich these microbes in a bioreactor and they are all going to perform in a very similar way.”

From these results, the team was also able to show that certain organisms did indeed do better under certain geochemical conditions.

The next step for the researchers is to partner with a mining company and build a larger pilot-scale system.

“When you have exceptionally low pH and exceptionally high iron concentrations, that’s an expensive water to treat,” Burgos said. “The conventional means of doing it are not the most efficient, and they are certainly not the most cost-effective. Biological low-pH iron oxidation is economical and can be seamlessly integrated into an acid mine drainage treatment system.”

The Office of Surface Mining Reclamation and Enforcement, the Appalachian Research Initiative and the Environmental Science and the China Scholarship Council funded this work.