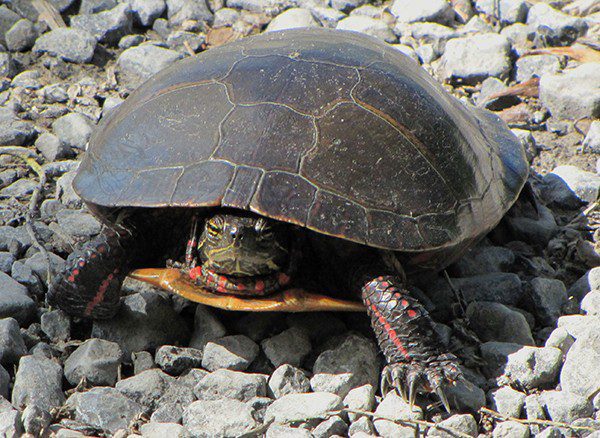 Decades of unregulated industrial waste dumping in areas of the Great Lakes have created a host of environmental and wildlife problems. Now it appears that Lake Michigan painted and snapping turtles could be a useful source for measuring the resulting pollution.

Researchers from the laboratory of Gary Lamberti, professor of biological sciences and director of the Stream and Wetland Ecology Laboratory at the University of Notre Dame, were working on a federal Great Lakes Restoration Initiative project to assess, enhance and restore Great Lakes coastal wetlands, when undergraduate researcher Dayna Smith suggesting checking for contaminants in turtles that were incidentally captured in fish nets. The project, funded by the U.S. Environmental Protection Agency, involves a large consortium of universities and agencies in the Great Lakes area, including Notre Dame, collaborating in a 10-year monitoring program. The program involves assessing water quality, plants, invertebrates, fish, birds and amphibians, but not reptiles.

Smith, Lamberti, graduate student Matthew Cooper and research technician Jessica Kosiara found that painted turtles, which can live up to 20 years, and snapping turtles, which live up to 50 years and are harvested for food, were common inhabitants of these wetlands. They analyzed the muscle, liver, shell and claws of captured turtles in four wetland locations for cadmium, chromium, copper, iron, lead, magnesium, manganese and zinc. The researchers discovered that all turtle individuals carried all eight metals, and that concentrations broadly correlated with assessments of metals in the soil of the wetlands. They also found that tests on small samples of shell and claw yielded results similar to those on muscle and liver, meaning that the tests can be performed without killing the turtles. Because the turtles live longer than fish and are relatively high on the food chain, they could be a useful source for measuring wetland pollution. Along with being sentinels for pollutants, snapping turtles that are consumed by humans may also pose a health risk to those individuals similar to the health advisories placed on large Great Lakes fish.

A paper describing the research, which was conducted in association with Notre Dame’s Environmental Change Initiative (ECI), appears in the journal Environmental Monitoring and Assessment. The paper can be found here:http://link.springer.com/article/10.1007%2Fs10661-016-5118-5.