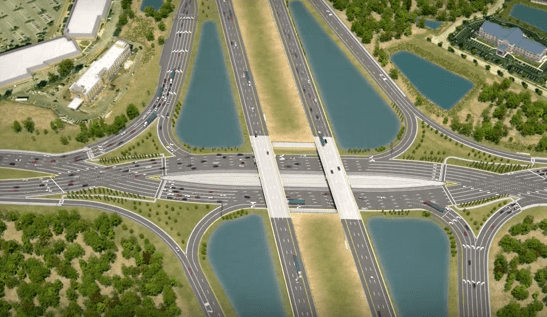 The reconstruction of the Interstate 75 (I-75) at University Parkway interchange project is rebuilding the interchange from the existing diamond design to a diverging diamond interchange (DDI) design, the first DDI in Florida to advance to the final design phase.

DDI is a relatively new and unique concept based on a standard diamond interchange with a shift in crossroad traffic within the interchange. Through traffic on University Parkway will cross paths twice as traffic shifts to the left side of oncoming traffic between the interstate ramps. The design allows left turn movements to occur without crossing oncoming traffic. The University Parkway DDI can handle future anticipated traffic while significantly reducing space and impacts required to implement the design. The project will widen about 3.5 miles of I-75, from north of Fruitville Road to north of University Parkway, to an eight-lane highway with three through lanes and one auxiliary lane in each direction added to the interstate median. This project will widen I-75 bridges over Erie Creek and Foley Creek and replace I-75 bridges over University Parkway. The project also includes widening about one mile of University Parkway from the Cattlemen Road/Cooper Creek Boulevard intersection to the Market Street/Lake Osprey Drive intersection.

A future ultimate I-75 design project will widen the interstate from interim eight lanes to twelve lanes. The project includes two express lanes, three general use lanes, and one auxiliary lane in each direction within the project limits. Ultimate improvements are planned to extend acceptable level of service for I-75 well beyond 2050.