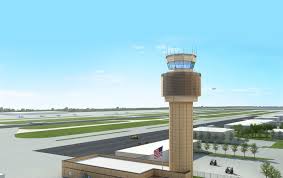 “This investment in our aviation infrastructure will position us to handle the future growth that we forecast for Charlotte,” said Secretary Foxx.  “This new air traffic control facility will help us serve travelers at one of our busiest airline hubs for decades to come.”

“The FAA is committed to modernizing our air traffic control system,” said Deputy Administrator Whitaker, who also is the FAA’s Chief NextGen Officer.  “Investing in NextGen will make air travel more efficient, dependable, and even safer.”

The 850-square-foot tower cab has enough room to accommodate additional future air traffic control positions.  The 42,000-square-foot base building will house an expanded terminal radar approach control (TRACON), with space for future growth.  Training rooms, administrative offices, and a power distribution supply system will also be in the base building, along with the latest aviation security and air traffic simulation capabilities.

In addition, the new 370-foot-tall tower at CLT will provide air traffic controllers with a bird’s-eye view of the airfield, and will accommodate current operations and future growth.  The new Charlotte tower will be the second tallest tower in the National Airspace System after the 398-foot-tall tower at Hartsfield-Jackson Atlanta International Airport. The existing tower was commissioned in 1979.  The facility’s operational growth, new air traffic control technology, and the airport’s addition of new runways and taxiways made the height and size of the old tower obsolete.

The FAA awarded a $60 million contract to build the new facility in January 2016 to Archer Western Construction.  Equipment, installation and training costs, and demolition of the old tower bring the total project cost to $112 million.

Construction of the tower and TRACON base building is expected to be complete in 2018, and the facility will be fully operational in 2020.