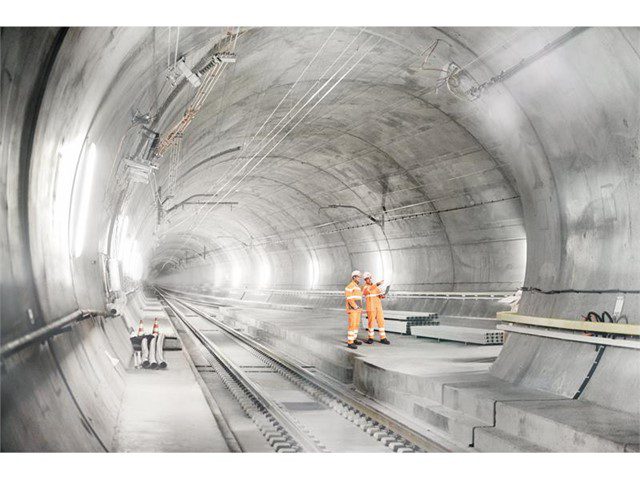 As Switzerland officially opens the world’s longest railway tunnel, the 57 km Gotthard base tunnel through the Alps, ABB has inaugurated a special pavilion at Rynächt at the tunnel’s north portal to highlight ABB’s contribution to what is being described as the “project of the century”. Among those present at the ribbon-cutting ceremony were ABB Chairman Peter Voser and CEO Ulrich Spiesshofer.

To mark the tunnel’s opening, special ABB pavilions have been set up at Rynächt and at the tunnel’s south portal at Pollegio to highlight the solutions that ABB has provided for the tunnel. ABB supplied the major electrical components for the entire 50-Hz power supply of the tunnel infrastructure, as well as the power supply and control systems for the ventilation system, which at 15.6 megawatts is the most powerful in the world.

The pavilions also the showcase ABB’s contribution to Switzerland’s rail tunnel infrastructure over more than a century as well as the company’s long association with the Swiss Federal Railways (SBB). ABB’s Swiss predecessor company, BBC, electrified the original Gotthard rail tunnel, completed in 1882, as well as the Simplon and Lötschberg tunnels at the start of the 20th century.

Following the pavilion inauguration, the ABB delegation, which also included Bernhard Jucker, President of ABB’s Europe region, and Remo Lütolf, Managing Director of ABB Switzerland, was attending the official opening ceremony of the Gotthard base tunnel, along with the leaders of Switzerland’s neighboring countries and Swiss government officials.

On June 4 and 5, the ABB pavilions will be open to the general public as part of a special program of events to celebrate the opening of the tunnel, which is a critical artery in Europe’s growing rail transport network.

For more information about ABB’s contribution to the Gotthard base tunnel, visit our special Gottardo 2016 microsite.