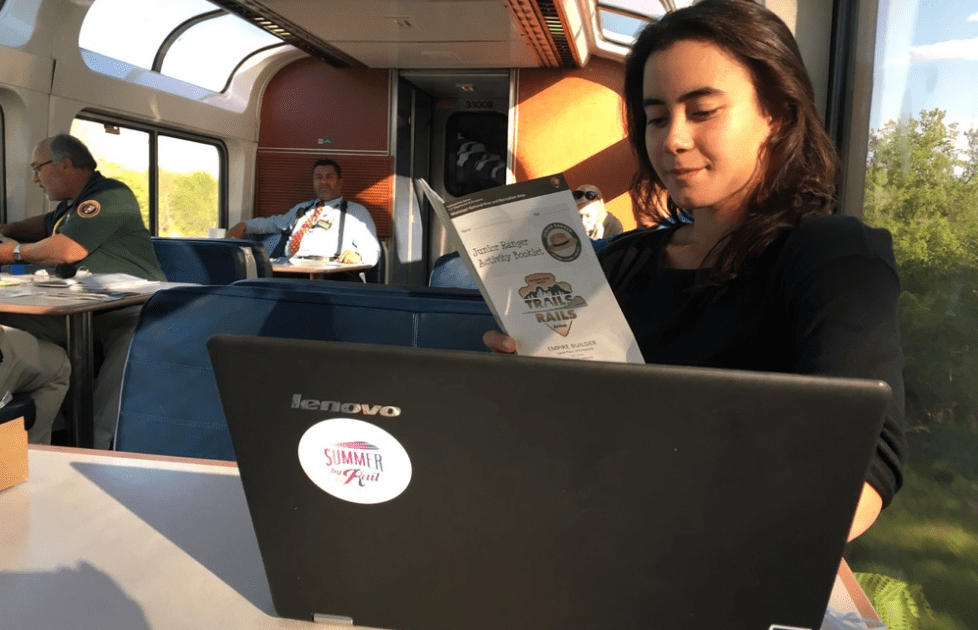 Washington, D.C.—With school and finals behind her, college sophomore Elena Studier this summer is taking her bike on an epic 38-day multi-modal “road trip” across the country by rail, visiting more than 18 cities and 15 states. Studier, 20, spent her school year interning with NARP and sketching out her big adventure. She kicks off her trip in New York City and will make stops in 20 locations—including Glacier National Park in Montana–before concluding more than 10,000 miles later in Washington, D.C. on June 20, 2016.

Ms. Studier will chronicle her trip on her blog, “Summer by Rail,” to highlight the 21st Century’s public transportation services in America, and capture how people live and move in different regions of the U.S.

“‘Summer by Rail’ is my effort to share with people the ever-changing lifestyles that we have in this country, and show the relationship people have with transportation services like rail, subways, buses, and bikes,” said Ms. Studier, who originally proposed the idea as her summer internship for NARP.  “Millions of people in the U.S. think that public transportation is only for major metropolitan areas, but these services can connect people from coast to coast, to the sights and attractions of cities, and to national parks like the Grand Canyon.”

During the trip, Studier’s main modes of transportation will be passenger rail with Amtrak, and her bicycle, which she has dubbed “Stevie.”  As Elena and Stevie travel from city to city, she will use other forms of public transportation to highlight the rich assortment of modes available to travelers including buses, ferries, trollies, ride-sharing, and more.

“Elena’s trip is a new and major project for NARP, as we want to highlight that people – friends and families – can travel across the country by passenger rail, and other services easily, seamlessly and comfortably,” said Jim Mathews, President and CEO of NARP.  “People often talk about commuting by rail in Europe or Asia, and think they can’t do it in the U.S., but that’s not true.  Elena’s trip will connect her to some of the biggest cities and attractions in the country.”

Studier’s “Summer by Rail” project will begin on May 15th, with the first leg of her route taking her to Chicago, IL.  Studier will visit 20 cities and multiple attractions on her trip including Seattle, WA; Portland, OR; St. Paul, MN; Denver, CO; Los Angeles, CA; Grand Canyon, AZ; New Orleans, LA and many more. Studier’s last leg will see her travel from Raleigh, NC to Washington, D.C on June 20th.

People can follow Studier’s “Summer by Rail” trip at www.SummerbyRail.com, where she will blog about her experience. Studier will also be running several social media accounts so people can follow her day-to-day activities. Social media channels and hashtags include:

About the National Association of Railroad Passengers

NARP is the only national organization speaking for the nearly 40 million users of passenger trains and rail transit. We have worked since 1967 to expand the quality and quantity of passenger rail in the U.S. Our mission is to work towards a modern, customer-focused national passenger train network that provides a travel choice Americans want. Our work is supported by more than 28,000 individual members nationwide.