/ Buildings / Cooling Down Chicago: How Green and Cool Roofs Could Impact Urban Climate

Cooling Down Chicago: How Green and Cool Roofs Could Impact Urban Climate 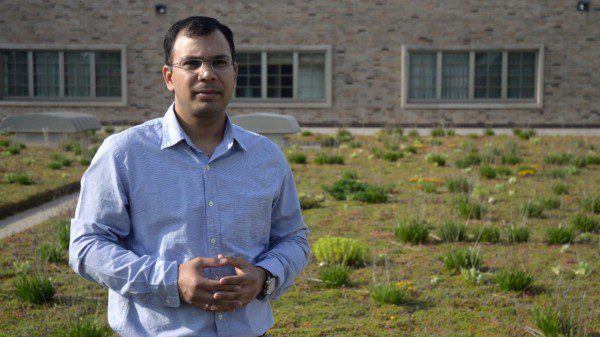 More than 50 percent of today’s population lives in cities. According to the United Nations Development Programme, that number is predicted to rise to 70 percent by 2050. Growing urbanization increases the overall temperature of a city as buildings, roads, parking lots and other infrastructure absorb heat, creating an urban heat island (UHI). A UHI causes areas like Chicago to be significantly warmer than surrounding rural areas, which threatens urban sustainability and can lead to high mortality rates and scarcity of resources as well as high electricity demands.

Newly published University of Notre Dame research found that the use of roofs with vegetation or reflective surfaces on top of Chicago’s current infrastructure could reduce UHIby lowering roof temperatures by a range of 3 to 4 degrees Celsius (5.4 to 7.2 degrees Fahrenheit). The study, part of a collaboration between Notre Dame and the City of Chicago, examined the efficacy of green or cool roofs using a regional climate model to simulate various real-world urban rooftop conditions.

“Our research analyzed how these non-conventional roofing strategies would impact energy use and air quality, as well as to understand the unique role Lake Michigan would play in mitigating UHI in Chicago,” said Ashish Sharma, postdoctoral researcher with the Environmental Change Initiative and the Department of Civil and Environmental Engineering and Earth Sciences, who led the study. “The lessons learned from this research will be integral for city planners as they decide how green infrastructure should be implemented.”

The researchers looked at the effects of green roofs — roofs that are at least partially covered with vegetation — and cool roofs — roofs that are designed to reflect more sunlight and absorb less. When compared to conventional roofs, both types had significantly lower temperatures. Therefore, by using either green or cool roofs, the temperature of the city could be greatly reduced.

This research builds on a collaboration between the University of Notre Dame, through Harindra Joseph Fernando, Wayne and Diana Murdy Endowed Professor of Civil and Environmental Engineering and Earth Sciences as well as Aerospace and Mechanical Engineering, and the City of Chicago to support the Chicago Wilderness Green Infrastructure Vision plan for 2040.

“Many cities are proactively working to reduce adverse impacts of UHI and this research is an attempt to investigate optimal UHI mitigation strategies, paying particular attention to the City of Chicago, with which we have had long-standing collaboration on urban research,” said Fernando. “The main conclusions of this work has policy and planning implications on how the city should respond to a growing UHI issue and what mitigation strategies should be adopted in the face of rapid urbanization and climate variability.”

In addition, the research team also evaluated wind patterns from Lake Michigan to understand how reducing UHI could impact wind within Chicago. By using green or cool roofs to reduce the temperature of the city, there will be less pressure difference caused by cool air from the lake mixing with relatively less hot air of Chicago, thus decreasing lake-breeze within the city. These results have revealed additional urban climate research questions. For example, when there is a reduction in lake-breeze and UHI in the city, there is also less vertical mixing of air. Based on current findings, it appears that this could stagnate air near the ground and potentially cause air quality issues.

“The next step in our research is to look at how the chemistry of green roofs might impact our meteorologically based findings,” Sharma said. “It is possible that plants may pose a solution for this issue, but competing feedbacks from green and cool roofs for UHI mitigation should be carefully considered.”

This summer, Sharma will work with Fei Chen of the Research Applications Laboratory at the National Center for Atmospheric Research to evaluate the role these mitigation strategies play in limiting the potential stagnation of air when implemented and address potential savings in electricity loads.

“This study provided city planners with meaningful and practical guidance regarding the pros and cons of using green roofs and cool roofs to mitigate urban heat inlands and heat stress,” Chen said. “I’m looking forward to collaborating with Sharma this summer on applying new urban modeling capabilities developed at NCAR to explore how much energy a city like Chicago can save by using green roofs or cool roofs.”

This study was published in Environmental Research Letters. Apart from Sharma, Fernando and Chen, other co-authors include Alan Hamlet, assistant professor of civil and environmental engineering and earth sciences as well as biological sciences; Patrick Conry, graduate student within civil and environmental engineering and earth sciences; and Jessica Hellmann, formerly of Notre Dame and currently the director of the Institute on the Environment and professor of biological sciences at the University of Minnesota. The study is available online at http://iopscience.iop.org/article/10.1088/1748-9326/11/6/064004.

For more about environmentally focused research at the University of Notre Dame, visit  environmentalchange.nd.edu.