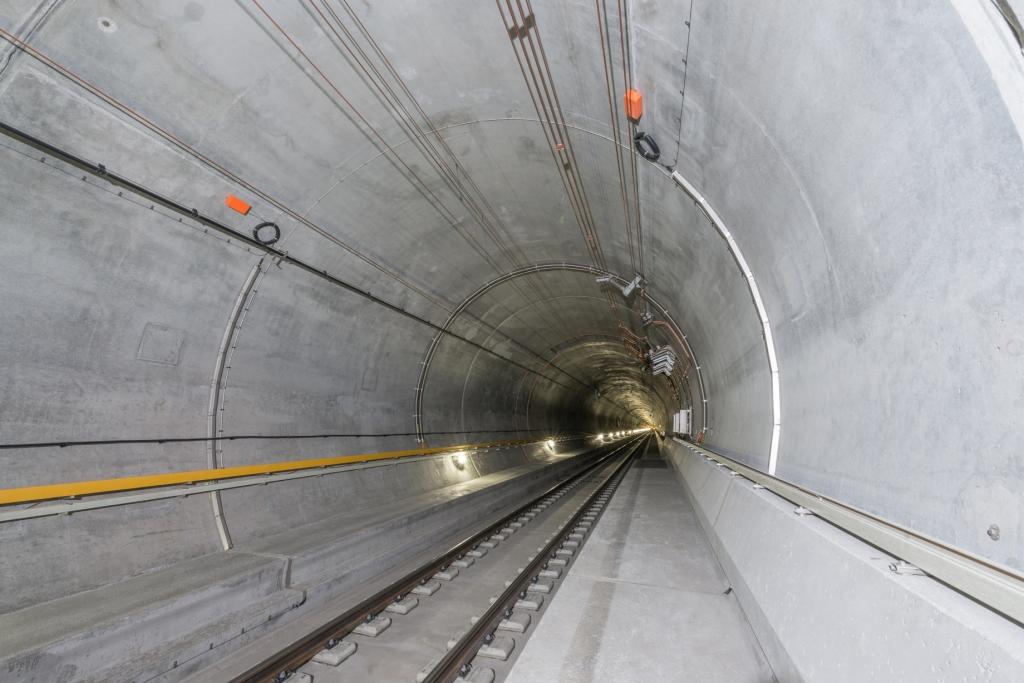 Globalization – the ongoing process by which regional economies, societies, and cultures have become integrated through a worldwide network of communication, trade and travel – has shown tremendous acceleration over the past few decades. Global trade has increased nearly thirty-fold since 1950. This is also reflected in transport networks. Freight transport worldwide is forecast to increase over 60 percent by 2030.

In light of urbanization, globalization, demographic change and climate change, improved and environmentally friendly transport systems are becoming ever more vital. More than ever, it is necessary to shift the regional and international transport of people and goods to the rails. In Europe, more regional as well as transalpine transport systems are needed to help transport the rapidly growing number of people and goods quickly and safely. Tunnel length appears to have no technical limits; engineers always find solutions for transiting even the longest train tunnels safely and efficiently.

On June 1, 2016, Switzerland will open the longest train tunnel in the world: the Gotthard Base Tunnel. Yet it represents only the beginning of a development that is forging ahead in current projects such as the Brenner Base Tunnel and the Singapore Metro – not to mention the planned national and international underground transport systems that will go far beyond today’s railway systems.

In tunnels, safety and security are inextricably linked. Because escape options are limited, it is essential to identify the cause of a problem in the tunnel or at the portals as early as possible. Whether it is protection from potential attack, identifying an issue with the traffic flow or detecting smoke, detection and management are at the heart of it all.

Fundamental to this is the need to have visibility from the tunnel entrance to the exit. Demand is rising for systems installed at tunnel entrances and exits that, along with the video system, supply reliable information about the situation in the tunnel and at the portals in all weather conditions – from reflected sunlight to fog, rain and snowfall to darkness. To this end, video surveillance and radar technology are being combined. The systems are increasingly based on algorithms that independently identify potential sources of incidents.

This technology takes the onus off the human observer and automates the identification of incidents, an important point considering the limitations of the human part of the process. Research has shown that an observer viewing two monitors with automatic image switchover will miss up to 45 percent of all activity in scenes after only 12 minutes. After 22 minutes, this number climbs to more than 95 percent.

Information overload is a typical problem of the modern age. Comprehensive studies have focused on how to minimize the negative effects of monitoring via surveillance systems. Automatic incident detection (AID), which is deployed in video and radar systems, is now able to automatically detect a broad range of incidents that can have serious consequences in a tunnel, such as the presence of vehicles, pedestrians, smoke or dropped loads. Through the use of intelligent zoning and virtual barriers, an alarm can be triggered automatically when the camera or the radar detects one or more incidents. Immediate intervention prevents the incident from escalating.

Video cameras are installed at strategic points and provide a full view into the tunnel. They not only provide surveillance but can also assess the situation. Should they detect one of the predefined activities, an alarm is triggered and the incident is captured on a digital recorder. In the event of an alarm, the video recording speed can be increased automatically to the full frame rate. This ensures that key information is available in high quality both during the incident and for subsequent analysis.

Filters reduce false alarms to a minimum. In train tunnels and at the portals, these algorithms can also be used for video- and radar-based motion detection, for example to identify pedestrians on the tracks inside the tunnel, which could cause an accident. Analysis technologies perform the actual surveillance and alert the operating personnel to potential dangers. This largely eliminates the monotony that can seriously impair the performance of operators. With such intelligent video surveillance solutions, tunnel operators are relieved of much of the observation workload so they can fully focus on any incident flagged and make the appropriate and correct response decisions.

As in any topic related to traffic or transport management, data mining is important for tunnel safety and security, not only when it comes to reviewing the adequacy of safety measures and systems but also ensuring a reliable and optimal traffic flow. Such systems can also be used to continuously improve safety measures or detect hazards that could impair tunnel availability and safety. These intelligent systems can collect a variety of data, such as pedestrians near the portal attempting to enter the tunnel. In such cases, operators have a predefined action plan that can prevent a longer closure of the tunnel that would otherwise be necessary until the pedestrian has properly exited the danger zone.

International rail directives stipulate the installation of automatic incident and fire detection systems only in stations and emergency stations in train tunnels. Rolling stock, i.e. the trains themselves, is equipped with its own independent fire detection system. Studies show that older tunnels in challenging urban areas or geological environments require a holistic approach to safety and security. This is the only way to prevent or mitigate incidents and fire hazards and their far-reaching consequences.

These aspects should be an integral part of both incident management processes and day-to-day operations. This is the reason why safety and security technologies are being integrated to an ever larger extent. It is not unusual to link video and radar surveillance to a linear heat detection system such as FibroLaser from Siemens. This system makes it possible to determine the precise location of a fire and to activate automatic extinguishing even when smoke obscures visibility.

Safety from design to operation

Accident prevention has long been a priority for tunnel designers. Past incidents have driven the evolution of tunnel design. Today, for example, tunnels feature two traffic tubes, one for each direction.

This focus on safety and security in the design stage, however, also needs to be reflected in the operational procedures once the tunnel is open. A holistic approach in which all potential incidents are monitored and automatically reported on an integrated screen allows early intervention and prevents escalation. It also ensures a more effective and coordinated response in the event of a major incident.