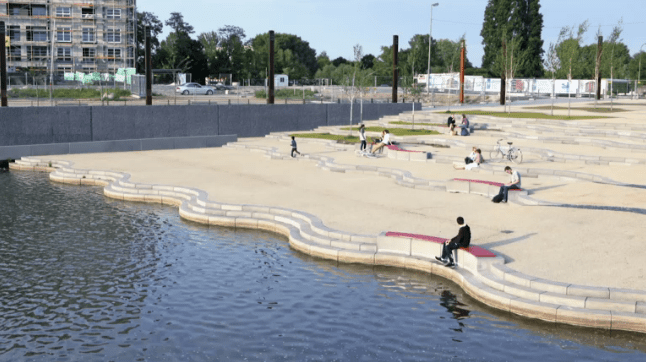 The harbour centerpiece of a new sustainable residential and commercial district on the River Main in the German city of Offenbach has now been completed.

The 320,000m2 site was formerly an industrial port used for storage and shipment of oil, gas and coal, that later fell into disuse. In order to rejuvenate the area into a highly sought after urban waterside location, an €800 million redevelopment project has been initiated to create multifunctional spaces for recreation, working and living.

Gerhard Hauber, Executive Partner for Ramboll Studio Dreiseitl and Project Leader, explains, “The aim has been to create a district that promotes local ownership, healthy living, and a modern neighbourhood that attracts residents and businesses.”

Ramboll Studio Dreiseitl has been responsible for the urban design concept and has drawn on multidisciplinary experts in landscape architecture, climate adaptation and physical planning.

The project team has developed a holistic stormwater management system to create ‘soft’ city spaces and streetscapes while retaining and cleansing stormwater before releasing it into the river and harbour. Innovative natural water treatment systems such as cleansing biotopes are integrated into the park spaces, and new natural habitats create a green oasis.

Streets and parking lots have also been transformed into open spaces where pedestrians have priority over cars. And a major focus area has been improving social integration in the area, which has been realised by relocating a cafe within the development, constructing a school to cater for existing and new residents, and establishing a hugely successful urban farming initiative.

The project’s sustainability credentials have been recognised after it prequalified for the prestigious DGNB Gold for a sustainable city district, which is comparable to a LEED Platinum rating and is a first in Europe.

Neel Strøbæk, Ramboll Group Director for Planning & Urban Design, adds, “All too often we see elaborate urban masterplans that appear impressive on paper but never materialise as they are either too costly or do not properly cater for people’s needs. The completion of the harbour at Offenbach is a great achievement that local people are already enjoying, and is testament to the project team’s focus on delivering a pragmatic and attractive solution.