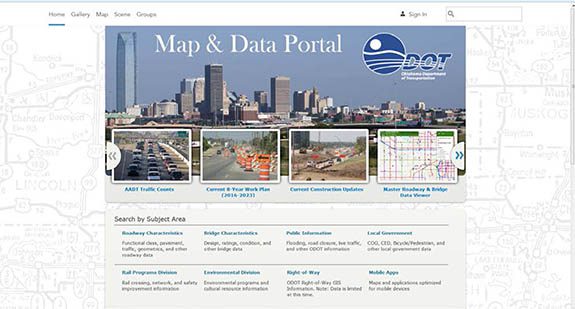 Matt Ball on May 31, 2016 - in Corporate, Surveying/Mapping, Transportation

There’s a lot to explore within the Oklahoma Department of Transportation’s new online map portal. From navigating bridge data to checking out upcoming construction projects and viewing a map of every railroad crossing in the state, the department is increasing transparency by providing a more interactive approach to many types of state maps and data.

Designed as a one-stop, all-inclusive data experience, the ODOT Map and Data Portal recently launched for public use atwww.odot.org under the Road Conditions Resource Center. Mobile device users will need to click View Full Site to reach the full portal.

The portal includes more than 30 interactive maps and data sets such as the planned highway projects in the Eight-Year Construction Work Plan, current construction updates, live traffic times and cameras as well as traffic counts for state highways and mileage chart generators among many others. Many of the key maps are also listed by ODOT field division so that users may quickly hone in to their area of interest.

“We create and maintain a tremendous amount of data about our state highway system that we want to make more readily accessible,” said Dawn Sullivan, ODOT director of capital programs. “This portal will be useful to contractors and vendors as well as the general public wanting to learn more about construction plans and highway conditions for their area.”

The new online portal also allows the department to maintain and update public data closer to real-time. Some data will be updated weekly while other maps and data sets will be updated as needed.

An interactive tool bar in the upper left corner of all the maps allows users to toggle layers on or off, add base maps, measure or share the map. There are six maps ready for use on mobile devices with more scheduled to be available in the future. Other types of maps and data available within the portal include:

History and trivia buffs have not been left out of the map portal. They will find several applications of interest, including:

The online portal was created by ODOT in-house using industry-standard mapping tools with an annual $17,500 licensing cost. Engineers and contractors who already use ODOT mapping data also may find many of these maps and the underlying raw data via ArcGIS Online by using the keyword “okdot.”

Comments are disabled
NEXT ARTICLE
U.S. Driving Totals Eclipse Prior Record
May 31, 2016
PREVIOUS ARTICLE
Singapore to Host the ITA Tunnelling Awards
May 31, 2016