Overcoming Constraints for an Important Connection 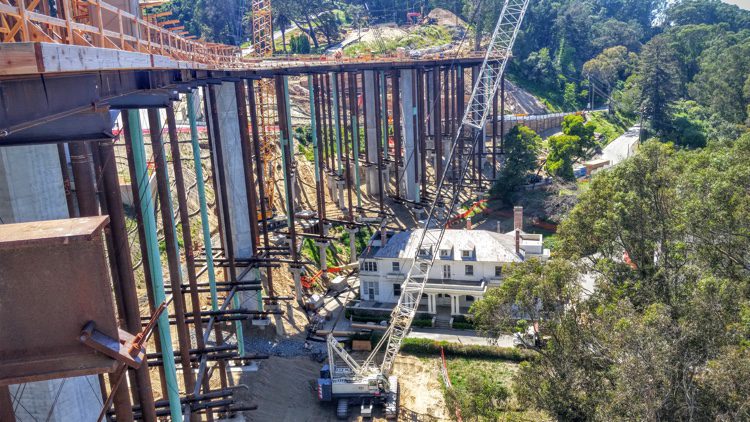 Status: Work is progressing on schedule with a planned opening in late late summer/fall 2016

The Yerba Buena Island I-80 East-Side Ramps Project is an impressive engineering achievement given the considerable design constraints of a challenging topography. This important link relocates the westbound exit ramp onto the north side of I-80 and reconstructs the westbound entrance ramp onto the San Francisco–Oakland Bay Bridge.

The project replaces two substandard ramps and paves the way for the increased traffic that will come with the Treasure Island redevelopment of the former U.S. Navy base, which is planned for 8,000 units and a population increase of 20,000 people. This $6 billion land-development project soon will move past the environmental remediation stage and into construction.

The San Francisco County Transportation Authority is overseeing all aspects of this signature project—its first of this magnitude—taking the project from environmental approvals, planning, engineering, design approvals, right-of-way certification and into construction.

“We are replacing a very short onramp of just a few hundred feet,” says Eric Cordoba, deputy director, Capital Projects, with the San Francisco County Transportation Authority. “This short onramp required you to accelerate rapidly from a full stop to merge into the traffic flow on the Bay Bridge. The off-ramp exit from the freeway was in the faster left lane with a very short ramp and a hard left turn with a posted 15 MPH limit. The project, which is on budget, provides improved access and safety improvements.” 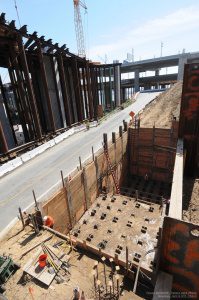 Preparation for the falsework began with shoring as deep as 40 feet.

The East-Side Ramps Project forms an important further enhancement of the impressive Bay Bridge project that’s a critical connector for the region. The original east span of the Bay Bridge—opened in 1936—was replaced in 2013 with a self-anchored suspension span.

The new east span was constructed for many reasons, but chief among them was the need to alleviate seismic safety concerns given that the bridge is located between the San Andreas and Hayward faults. A portion of the upper deck of the previous east span collapsed onto the lower level during the 1989 Loma Prieta earthquake. Although this issue was remediated, it remained an ongoing concern. The west span underwent extensive seismic retrofitting, but such a retrofitting approach wasn’t feasible for the east span, so it was replaced.

The new east span has many innovative seismic solutions, and it was imperative that the ramps didn’t overload any of the previously constructed features or impact the bridge’s seismic performance.

The intent for an FEE event is that the structure responds elastically with no impact between the adjacent frames in either the longitudinal or the transverse directions. The goal is very minor damage with the structure back in service in a very short time. The objective with the larger SEE earthquake is to make sure there’s no significant damage and that any damage is repairable.

“Geotechnical engineers worked alongside seismic engineers to develop time histories of the ground motions for the new east span and these were utilized for the East-Side Ramps Project,” says Al Ely, vice president, Structures, Moffatt & Nichol, who was responsible for the initial structural concept. “There were a total of six time histories involved, and we had to impose them in two directions. The ramps are connected to the transition structures for the Bay Bridge, so it was a complex geometric model that was tested using SAP software.” 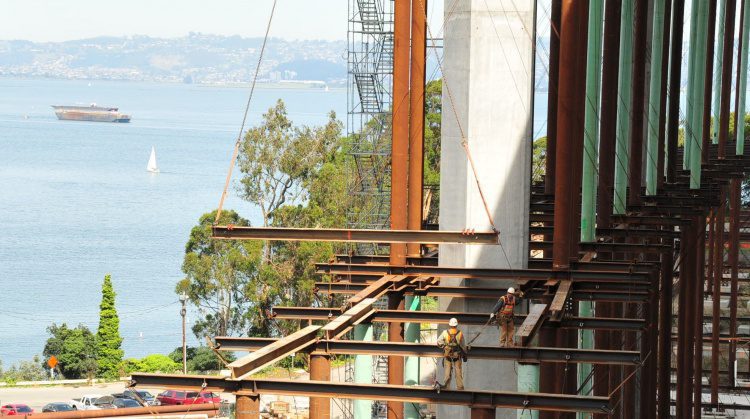 The East-Side Ramps Project is one of the more interesting of a sequence of updated transportation connections happening on Yerba Buena Island and Treasure Island. It stands out due to a broad number of design constraints related to the site complexity and the existing east-span bridge.

“This was a uniquely challenging job, and still is, due to geographical constraints,” says Mike Scott, P.E., resident engineer, WSP Parsons-Brinkerhoff, which is in charge of construction and inspection. “We’re constrained on one side by the Bay Bridge, where there is limited access. On top of that, we’re in some steep topography, where we’re working nearly 180 feet from top to bottom with roads that transverse those steep slopes. This limits our ingress and egress abilities.”

The cabling system for the Bay Bridge meets the roadway-level structure not far from the ramps, and the off-ramp begins as close as possible to this anchor point. The design had to accommodate the basic highway geometric design requirements while fitting into the tight site.

Given the site’s difficulties, the contractor had to plan carefully for the sequencing of falsework installation. Golden State Bridge, the contractor on the project, purchased a 275-ton Liebherr crane from Germany for the project, given its long reach and high capacity. The contractor built benches and access roads within the hillside, where it could position the crane, and it had to carefully sequence construction to avoid trapping the crane during the process.

A series of buildings near the ramp area were used by the U.S. Navy in the 1940s. Two of the buildings, Quarters 10 and Building 267, were in the way of where the new ramps meet the road. Given the buildings’ historical significance, they needed to be relocated rather than demolished, so they were moved nearby to the Clipper Cove Beach Area as part of the environmental mitigation.

The Admiral Nimitz House is closest to the base of the formwork and is the building of greatest historical significance.

“We did vibration monitoring on the Nimitz House during all the pile driving,” notes Scott. “The closest three footings to the building did not have driven piles due to concern about vibration. They were cast and drill-hole piles of two-foot diameter to eliminate any potential of having pile-driving vibrations damaging the house.”

The U.S. Coast Guard also has a base close to the ramps. Given this active base used for emergency services, the license agreement stipulated that any road work wouldn’t delay traffic more than five minutes to or from the base. Alternative access needed to be provided, and any roadwork was carefully sequenced to allow for constant traffic flow. 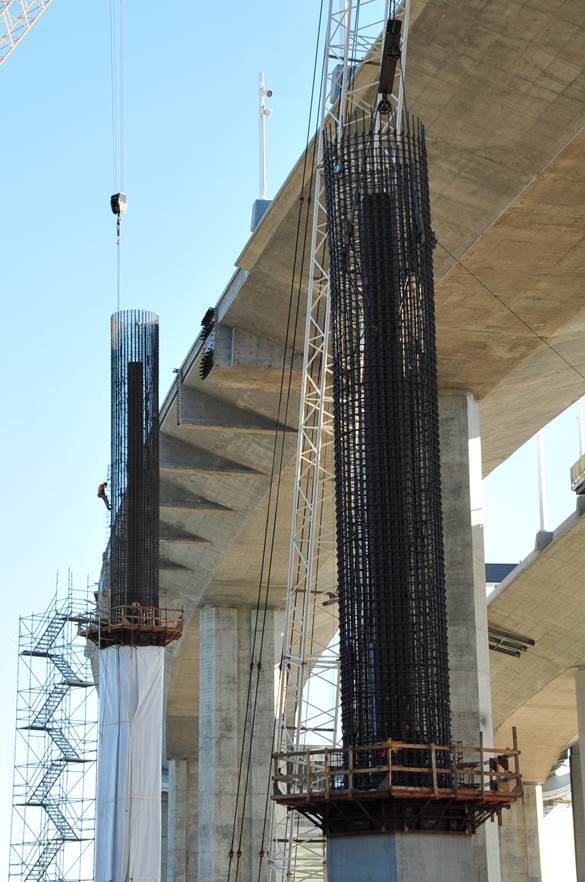 The contractor was responsible for designing the very tall and slender falsework that’s 180 feet in the air and in a very windy area.

“My team did an independent analysis of the falsework design,” adds Scott. “We modeled the falsework using LARSA, a 4D bridge-modeling software that does finite-element analysis. It’s a critical and complex falsework system, and we wanted to make sure the contractor’s design met all contract requirements and we had a good solid check on it to make sure there were no issues.”

The wind loads were of major concern, requiring that each falsework component was tied down to the foundation with tension rods to prevent any uplift or turning over from the high winds. In addition, steep geography on the site required shoring up to 40-feet deep adjacent to some of the roadways. Multiple rows of tie-backs with some strutted systems were required in the complex shoring system needed to construct bridge foundations.

The steep hillside also caused concerns about erosion given the intense rainfall that often occurs on the island. Additional drainage was designed to make certain the rains wouldn’t create erosion that would impact the falsework. 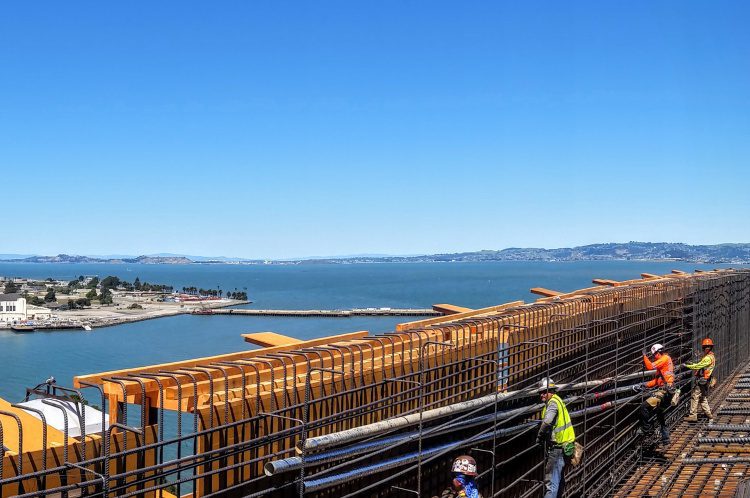 Work on the east span began well before the ramps project, but details of the design were coordinated so the new ramps would tie in well with the existing bridge.

“In 2010, we issued a contract change order (CCO) to the Bay Bridge project that modified a lot of the bent caps,” notes Ely. “The CCO called for additional reinforcing to accommodate the lane widenings and tie-in areas. They were fairly simple modifications with some added deck reinforcing to the tie-in for the off-ramp and on-ramp.”

The Yerba Buena Island East-Side Ramps Project is the first of several connections getting updated on the island. Caltrans now is working on the eastbound on- and off-ramps, and the West-Side Bridges Retrofit is another project on the island that will seismically retrofit five bridges as well as demolish and replace three more.

“There’s a sequence here,” says Cordoba. “We will open the westbound off ramps in the late summer/fall timeframe. Caltrans should be finishing their work on the eastbound on- and off-ramps by the end of 2017. Then we’ll jump to the other side of the island to reconstruct those eight bridges, build new retaining walls and push the roadway in away from the island’s edge.”

Ongoing construction of transportation connections and the Treasure Island Development will make the area a very busy place for years to come.

“We’ve all had to have the right partnering attitude to make this happen and be able to make sure we know who is doing what and when they’re doing it,” says Cordoba. “We’re trying to make sure we’re not only dealing with our projects, but looking at the bigger picture to facilitate all the common improvements for the public to enjoy.” 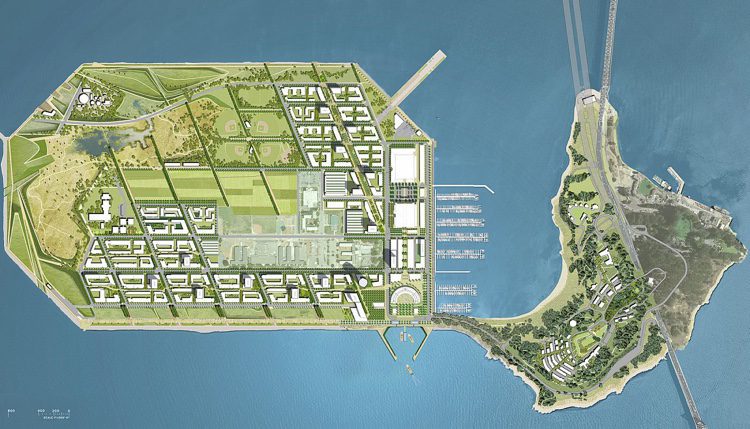 The 393-acre manmade Treasure Island site has been undergoing environmental remediation for radiological and chemical contamination as well as removal of aging Navy buildings leftover from its days as a training center and departure point for the Pacific Fleet during World War II.

The first of four construction phases includes a hotel, a ferry terminal and 300 market-rate-priced condominiums. More than half of Treasure and Yerba Buena Islands will be left as parks and open space under the redevelopment plan developed by Skidmore, Owings & Merrill.

The overall development is planned for 8,000 residences and 20,000 inhabitants. The master plan includes sustainable strategies that include greywater recycling, composting and the use of renewable power.

Comments are disabled
NEXT ARTICLE
New Generation of Controllers Automate a Wide Range of Rail Applications
May 31, 2016
PREVIOUS ARTICLE
The Climate Response—Government Leaders Take Action, Evaluate Vulnerabilities Due to Climate Change
May 31, 2016