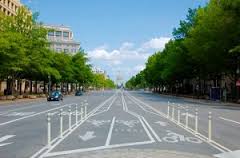 The American Association of State Highway and Transportation Officials’ Standing Committee on Highways approved the resolution during the association’s annual spring meeting that calls for the next update to AASHTO’s design guidelines to better address multi-modal issues.

That committee is made up of engineers from various state DOTs, and brings together best-practices expertise from around the nation.

“We have seen consistent growth in walking and biking throughout the country, and we also have seen an increase in crashes and fatalities involving them,” said Kirk Steudle, Standing Committee on Highways chair and director of the Michigan Department of Transportation. “Our state agencies need robustly-researched guidance on how to best incorporate all modes of travel when designing safe and efficient roadways that serve all users.”

AASHTO’s Green Book (formally known as A Policy on Geometric Design of Highways and Streets) consists of research-based, peer-developed guidance that serves as the basis for the design of roads on the National Highway System, as well as many state and local roads. An update to the Green Book is currently under development.

“Multi-modal design philosophies have been described using a variety of names, including context sensitive solutions; practical design and complete streets,” said Bud Wright, AASHTO executive director. “Regardless of the name, the ultimate goal is always to design a safe transportation system that supports a greater quality of life and robust economy.”

The American Association of State Highway and Transportation Officials (AASHTO) is the “Voice of Transportation” representing State Departments of Transportation in all 50 states, the District of Columbia, and Puerto Rico. AASHTO is a nonprofit, nonpartisan association serving as a catalyst for excellence in transportation. Follow us on Twitter at http://twitter.com/aashtospeaks.