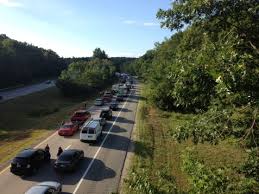 “The TIFIA loan will help New Hampshire embark on an ambitious project that will create more opportunity for communities along the corridor,” said Secretary Foxx. “As seen in our Beyond Traffic study released last year, this is a region with a rapidly growing population, experiencing greater traffic and increased gridlock. The I-93 widening will provide the area with an economic boost, and increase access to businesses and jobs.”

The project will reconstruct 19.8 miles of I-93 and widen the roadway from two to four lanes in each direction from Manchester at the I-93/I-293 interchange to Salem at the New Hampshire-Massachusetts state line. The project will also reconstruct and reconfigure interchanges, complete work on bridges and construct park-and-ride lots and bus facilities.

“The state will be better connected and commuters and freight shippers will have more reliable travel times,” said FHWA Administrator Gregory Nadeau. “The new lanes along with other improvements will help address chronic congestion and the condition of aging infrastructure in the region.”

I-93 is one of the state’s principal highways and is critical to the economic vitality of the state, region and local communities. Built in the early 1960s to accommodate up to 70,000 vehicles per day, today it suffers from continuing congestion and is in need of major rehabilitation. Average daily traffic has climbed to an excess of 100,000 vehicles per day on certain segments, and the New Hampshire Department of Transportation expects that number to increase to 140,000 in the next four years.  Traffic frequently backs up between the state line and Manchester, especially during morning and evening rush hours.

The TIFIA credit program is designed to fill market gaps and leverage substantial non-federal investments. Historically, each dollar of federal funding has provided up to $14 in TIFIA credit assistance and supported up to $40 in transportation infrastructure investment. In 2016, the USDOT has financed $1.3 billion to support transportation infrastructure across the country.