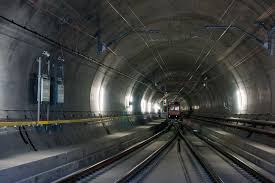 Heerbrugg, Switzerland, May 25, 2016—Surveying and monitoring systems made the construction of the Gotthard Base Tunnel in the Swiss Alps possible. The tunnel will be inaugurated on 1 June, and the breakthrough on 15 October 2010 was due to highly precise surveillance and monitoring technology. The 57-kilometre long tunnel (35.4 miles) is the longest and deepest rail tunnel in the world.

Drilling a 57-kilometre long tunnel starting from both sides of the mountain and meeting in the middle with barely any deviation was a truly challenging task. Highly precise measuring instruments were needed to successfully accomplish the project.

Measuring down to millimetre accuracy

At the tunnel site, the surveying consortium VI-GBT started measuring in 1996, when construction work began 20 years ago. The surveying engineers set up a basic network with 20 reference points. For this task, they used total stations, or optical measuring devices, and GPS, or satellite navigation solutions from Leica Geosystems, a global company with Swiss roots and a tradition of nearly 200 years.

The drilling began not only at Erstfeld (north portal) and Bodio (south portal), but also at three intermediary points where side channels joined the main tunnel: Amsteg, Sedrun and Faido. In Sedrun (1,405 m high), a vertical tunnel 800 m long was drilled down to the main tunnel so construction workers could push north as well as south from that point.

During tunnel construction, surveying and measuring tasks had to be repeated every 400 metres (437.4 yards). In order to make sure the tunnel was precisely on course, the surveyors had to check coordinates of the reference points. In addition, the exact height had to be measured with levelling devices – also from Leica Geosystems.

“When we broke through in the middle of the tunnel on October 15, 2010, the two tunnel sections met with a deviation of only 8 centimetres or 3.1 inches, whereas 25 centimetres or 9.8 inches would have been tolerated,” said Ivo Schaetti, a surveying engineer of VI-GBT. He explains that surveying tunnels is very demanding due to temperature changes, humidity and dust. “Thankfully, we could always rely on the accuracy of the surveying solutions from Leica Geosystems,” Schaetti adds. “They are very precise. You can measure a distance of 400 meters with accuracy of less than a millimetre or 0.03 inches.”

Monitoring the dams above the tunnel

During the entire construction period, the surroundings of three artificial lakes above the tunnel required monitoring: Curnera, Nalps and St. Maria. There was a slight probability that the construction of the tunnel – 1.4 kilometres underneath the lakes – would affect the stability of their dams. This monitoring was also done with instruments of Leica Geosystems. The fully automated devices monitored the dams throughout the entire tunnel construction from 2000 until 2015.

“Our total stations monitored the tiniest movement of the prisms that were mounted near the dams,” says Falko Henning, Leica Geosystems product manager. “Happily, no unusual movements occurred.” There was no major delay during construction time, and the tunnel will be inaugurated as planned.

Leica Geosystems has a rich history in Switzerland. From its origins with Kern & Company founded in 1819 in Aarau, today the industry leader in measurement technology operates globally serving customers in many segments, including engineering, construction and mining.

“Looking back on a tradition of nearly 200 years, we’re honoured to once again take part in a significant milestone in Swiss history by providing the surveying and monitoring resources to successfully open the Gotthard Base Tunnel,” said Juergen Dold, Leica Geosystems CEO. “With a commitment to Swiss quality and a global outlook, we will continue to innovate and support professionals around the world achieving feats of engineering like this tunnel.”