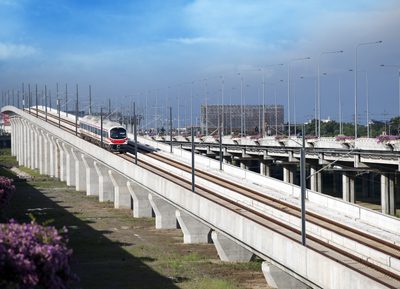 Bangkok Mass Transit System Public Company (BTSC) has placed an order with a consortium of Siemens and the Turkish public transportation vehicle manufacturer Bozankaya for the delivery of 22 four-unit metro trains. In addition, Siemens will take over their service and maintenance for 16 years. The trains will be manufactured at the Bozankaya factory in Ankara, Turkey. The Siemens scope includes the bogies, traction and braking systems, auxiliary systems, as well as the project management, development, construction and commissioning of the trains. Delivery of the first metro trains is scheduled in 2018, and the order will be completed in the following year. The trains will operate on the existing BTS (Skytrain) system and the Green Line extensions.

“We have enjoyed a successful collaboration with BTSC over many years. With the new trains, we will be seamlessly continuing our success story in Bangkok. Specially designed high-capacity trains will enable the line to transport the over one million passengers a day that has been forecast,” said Jochen Eickholt, CEO of Siemens Mobility Division.

Thailand’s capital of Bangkok is considered to be one of the most important economic centers in the entire Asia-Pacific region. The Bangkok Metropolitan Region is the attractive urban heart of the country and has a population of nearly 20 million. The Region’s population is steadily growing, and the World Bank expects that roughly 60 percent of the country’s population will live in and around Bangkok by mid-century – possibly ten million more residents than today. The city faces the enormous challenge of securing the mobility of its residents. To meet this challenge, Bangkok’s city and transportation planners developed an ambitious master plan back in 1994: the Bangkok Mass Transit Development Plan with over a dozen new metro and light rail lines. By 2021, plans aim at increasing the use of public transport systems from 40 percent at present to 60 percent. This ambitious target requires the systematic expansion of the city’s mass transit rail lines.

The Siemens Mobility Division conceived and implemented the first three high-capacity mass transit rail systems for Bangkok that are the basis for the system’s further expansion. The BTS (Bangkok Transit System) Skytrain elevated train system from Siemens, initially around 23 kilometers in length, was the first rapid transit system to be built in the Thai metropolis and has substantially reduced private transport since its inauguration in 1999. The system was subsequently extended by roughly 13 kilometers. The current two extension projects are adding a further 32 kilometers including 13 kilometers to the south of Sukhumvit Line with seven stations, and 19 kilometers to the north of Sukhumvit Line with 16 new stations, to increase the network’s total length to around 68 kilometers. The south extension from Bearing to Samut Prakan is scheduled to be completed by the end of 2018. The north extension from Mo Chit to Khu Khot is planned to begin operation by 2020.