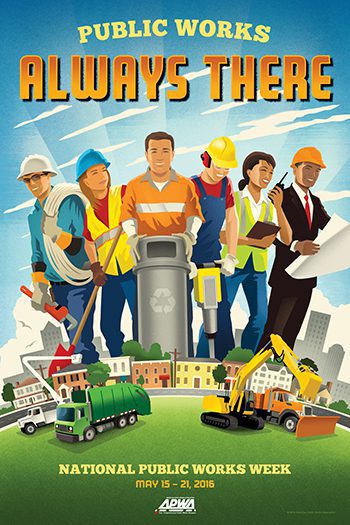 Washington, D.C.  – The U.S. Senate passed a resolution (S.Res.471) on Wednesday, May 18, recognizing National Public Works Week (NPWW) during May 15-21,2016  and declaring that “public works infrastructure, facilities, and services are of vital importance to the health, safety, and well-being of the people of the United States.” Each year, the American Public Works Association (APWA) celebrates  National Public Works Week to acknowledge its’ more than  29,000 members who are public works leaders and professionals in municipalities across North America.

S. Res. 471 is sponsored by Senate Environment and Public Works Committee Chairman Jim Inhofe (R-OK) and Ranking Member Barbara Boxer (D-CA), and highlights that “public works infrastructure, facilities and services could not be provided without the dedicated efforts of public works professionals, including engineers and administrators, who represent state and local governments throughout the United States.”  As the  “stewards of infrastructure,” public works professionals  design, plan, build, operate and maintain transportation, drinking water, wastewater, and stormwater infrastructure, solid waste removal systems, public buildings, sustainable infrastructure, and other structures and facilities vital to the quality of life in  every community.

“APWA thanks Senator Inhofe and Senator Boxer for their support of National Public Works Week this year with the introduction of S.Res 471, and for their continued recognition of the vital importance of public works leaders and professionals in their service to communities,” said APWA Executive Director Scott D. Grayson.  “The observance of National Public Works Week in the U.S. Senate and all over North America increases the visibility and awareness of public works issues on the national, regional and local levels, including the  need for increased investments in our nation’s transportation,  clean water and drinking water infrastructure, and the important role of public works as “emergency responders,” Grayson said.

Instituted in 1960, NPWW has been observed for 56 years by the American Public Works Association (APWA) and its members to raise awareness of the contributions of public works professionals and the crucial role that infrastructure, facilities and services play in the quality of life in all communities.  The 2016 National Public Works Week theme is “Public Works… Always There.”

About APWA:
The American Public Works Association (www.apwa.net) is a not-for-profit, international organization of more than 29,000 members involved in the field of public works.  APWA serves its members by promoting professional excellence and public awareness through education, advocacy and the exchange of knowledge. APWA is headquartered in Kansas City, Missouri, has an office in Washington, D.C., along with 63 chapters across North America.