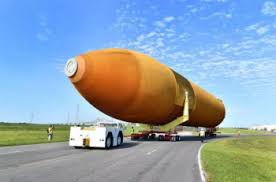 ET-94, which is orange in color, started its 5,000-mi journey from New Orleans in April, and it arrived in the seaside community of Marina del Rey, located in Los Angeles County, on May 18, 2016. Now docked in Marina del Rey, minor engineering tasks will be conducted to prepare it for land transport. On May 21, 2016, at 12:01 a.m., it will travel through the streets to its final destination at the California Science Center in Exposition Park. The journey will take about 18 hours.

“Parsons is a long-time supporter of the California Science Center, which ties directly to our emphasis on technology and engineering,” stated Chuck Harrington, Parsons’ Chairman and CEO. “We’re proud to have been part of this historic planning effort for the Space Shuttle and External Tank 94 as a continuation of our legacy with the U.S. Space Shuttle program dating back 30+ years. Our contributions on this most recent effort included a sustainability plan to minimize route mileage, while protecting trees and landscaping along the proposed land portion of the route.”

Parsons, as part of a team of local consultants, also donated services to the California Science Center by assisting in the development of Endeavour’s Final Placement Logistic Plan. The plan was put into action on October 12 and 13, 2012, and included structural analysis of the I-405 overpass at Manchester Boulevard, an inventory of obstructions (street lights, power lines, traffic signals, trees, etc.), and selection of equipment and methodologies to reduce the impact to existing infrastructure and minimize the number of mature trees affected. Like Endeavour’s homecoming, ET-94’s journey to the California Science Center will be a historic event and a chance for the community to come together to celebrate and be inspired by this 154-ft-long engineering marvel.

Comments are disabled
NEXT ARTICLE
State DOTs and the Emergence of Autonomous Vehicles
May 20, 2016
PREVIOUS ARTICLE
HDR Receives Top Hydropower Honor
May 20, 2016