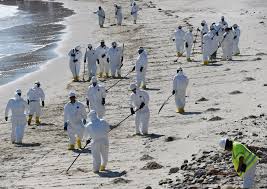 WASHINGTON—The U.S. Department of Transportation’s Pipeline and Hazardous Materials Safety Administration announced today that it has completed its investigation of the May 19, 2015, Plains All-American pipeline release in Santa Barbara County, California. The pipeline ruptured and released an estimated 2,934 barrels of crude oil on land and beaches, and into the Pacific Ocean. PHMSA’s investigation focused on the factors that caused the pipeline to fail, and on factors that contributed to the severity of the crude oil release.

PHMSA’s Failure Investigation Report identifies the direct cause of the failure as external corrosion. The investigation found that several factors contributed to the severity of the release, including the company’s failure to protect the pipeline from corrosion, and the company’s failure to detect and respond to the pipeline rupture once it occurred. At the time of the release, Plains operated Lines 901 and 903 as interstate pipelines, subject to PHMSA regulatory, inspection, and enforcement jurisdiction.

“PHMSA’s investigation reveals that a number of preventable errors led to this incident, and that the company’s failures in judgement, including inadequate assessment of the safety of this line and faulty planning made matters worse,” said U.S. Transportation Secretary Anthony Foxx. “Millions of dollars have been spent to repair the substantial damage caused to the environment from this spill. It is completely unacceptable, and we will hold the company accountable for its actions.”

During its investigation, PHMSA brought in an independent in-line inspection (ILI) expert to review ILI data for Lines 901 and 903, a pipeline connected to 901 that has similar construction and operating conditions. PHMSA also ordered the company to hire an independent metallurgical expert to review the condition of the pipeline in the area where it failed, and oversaw excavation along several areas of Line 901 and 903 to compare defects detected by the ILI analysis to the actual condition of the pipeline upon excavation. The review of the operator’s ILI results, including the ILI conducted two weeks prior to the pipeline failure, revealed instances where the inspection tool did not accurately determine the degree of corrosion occurring in Lines 901 and 903. The discrepancies between the tool measurement and the actual corrosion were as much as 40 percent in the area where Line 901 failed. PHMSA’s investigation found that the operator failed to properly analyze the ILI tool data and that a different ILI tool type could have provided more accurate information to assess the type of corrosion occurring on Line 901.

“This report confirms our preliminary findings on the cause of this incident, and reveals that the operator failed on multiple levels to prevent, detect and respond to this incident, Now that we have completed our investigation, we will focus on enforcement options,” said PHMSA Administrator Marie Therese Dominguez. “While we will continue to work with other Federal and State agencies on civil and criminal actions. The bottom line is this pipeline will not be allowed to operate until we are satisfied that all of its safety issues have been appropriately addressed.”

As part of the investigation, PHMSA conducted interviews with Plains personnel, performed a review of the operator’s control room operations in Midland, Texas, and reviewed the operator’s internal controls and procedures for emergency shutdowns and systems that detect leaks and ruptures. PHMSA’s investigation found that the system used to detect leaks did not alert control room staff to the release when it occurred. Also, the operator did not establish formal requirements for emergency shutdown and leak detection alarm training. PHMSA’s investigation found that a control room operator inhibited an alarm that could have assisted with the recognition of the rupture.

The consequences of the spill were compounded by an oil spill response plan that did not adequately consider a culvert that was installed after the pipeline was constructed. The culvert provided a path between the pipeline and the Pacific Ocean that allowed crude oil to easily flow towards the beach and ocean.

Immediately following the incident, PHMSA issued a Corrective Action Order (CAO) that required Plains to shut down Line 901. As the failure investigation progressed, the CAO was amended and PHMSA required Plains to take a number of actions to ensure the safety and integrity of Line 901 and Line 903, including emptying both lines of oil and filling them with inert gas to ensure safety during the investigation and development of a remedial action plan. PHMSA’s CAO will be further amended to direct the operator to take additional actions to address the root cause of this incident and any other factors that contributed to the pipeline failure based on the findings of PHMSA’s investigation.