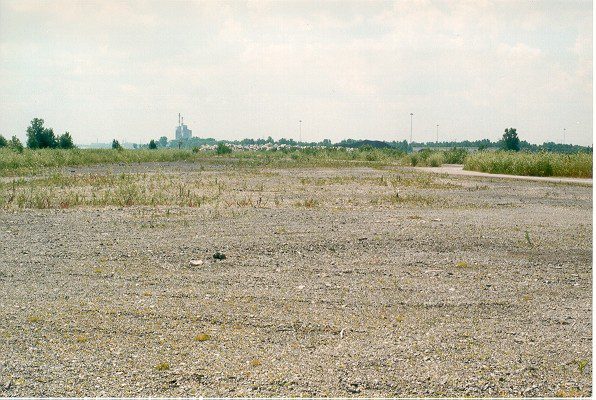 May 18, 2016—On the South Side of Chicago, East 87th Street ends in a gentle curve more suited to a suburban neighborhood than a gritty industrial area. A few steps further and you’re at Lake Michigan’s shoreline. Welcome to Steelworkers Park.

Once the world’s largest steel working mill, the property was literally built from the waste product of the steel industry: slag. This hard, gravelly scrap was dumped to fill in the natural marsh along the lakeshore. When U.S. Steel’s South Works closed in 1992, the deep and unforgiving slag infill remained.

The “City of Big Shoulders” found itself the owner of an abandoned slag brownfield along Lake Michigan’s shoreline, less than 10 miles from downtown. The area is also part of the Calumet Region—a confluence of three rivers into Lake Michigan. Chicago’s 1909 vision to keep the shoreline “forever free and clear for all to enjoy” had a second chance—if it was affordable.

Enter the Metropolitan Water Reclamation District of Greater Chicago. Along with the Chicago Park District, they were asked to evaluate the site and demonstrate the feasibility of rehabilitating the forbidding slag surface into parkland.

Lakhwinder Hundal, Tom Granato, and rest of the Water Reclamation District team took on the challenge. With a size of 511 football fields, the entire property would require over 63,000 dump trucks of topsoil. The cost would be prohibitive—and take good soil away from its home.

The team had a better plan. For this second-chance site, they gave resources already available, biosolids and dredged sediments, a second life. This re-purposing meant what could have been an expense was instead a blessing.

Sediments are the result of dredging to keep shipping lanes in rivers navigable. When used as a cap for industrial sites, they are dry and crusty. They have poor structure and lack nourishment. Hundal explains, “We used dredged sediments to showcase that instead of spending more money to dispose of these sediments, they can be beneficially reused if blended with biosolids.”

Biosolids are the result of U.S. EPA-approved processes in treating wastewater. And with 5.25 million people in the sewage district, biosolids are something the Reclamation District has in spades. Hundal has no qualms in using it. “I prefer biosolids over other products because I know that, unlike other byproducts, it has been thoroughly tested in order to comply with regulations. Some people equate biosolids with sludge, a waste material that should be disposed of, not beneficially used. But it is one of the most studied products as compared to manure, compost, and even topsoil sold in the stores.”

The plan was convenient and affordable—and locally sourced. “Topsoil is $35 per cubic yard delivered at the site. Biosolids were delivered to the site at no cost,” Hundal says.

The research team mixed different proportions of biosolids and sediment on eight test plots. For four years, they grew Illinois’ top four turf blends to determine what would have the best long-term success. Since the site was close to Lake Michigan, the team was also careful to measure water quality.

The plan worked. The researchers found the nutrient-rich biosolids increased soil fertility. Plots with a higher mix of biosolids had darker green, more robust turfgrass. Its health increased over the four-year trial. By contrast, plots without biosolids decreased in fertility in their fourth year.

The long-term success is important, Hundal says. “Some people had concerns that vegetation may not sustain for a long time. Others worried that nutrients may leach out of biosolids over time. So we wanted to prove this to all of those critics.”

At the same time, the use of biosolids increased the soil’s ability to absorb and retain water. Biosolids contain valuable organic matter — decomposing microorganisms and plants present in soil. “Organic matter captures and retains nutrients and water in the root zone, which enables the plants to grow well even during dry spells and in poor soils,” Hundal says.

Additionally, the biosolids helped eliminate risk from other industrial chemicals on-site. Iron, lead, copper, chromium, zinc, aluminum, and nickel were tested. These levels remained safe, and the turf did not take up the metals.

According to Hundal, the biosolids created a safer environment. “Biosolids contain material that reduce and eliminate any risk of these metals being taken up by the vegetation to the food chain. In other words, wildlife eating grass and tree leaves are safe from any potential impact of the heavy metals present in slag.”

For use as a park, the soil is also safe, Hundal says. “Kids can play in the park without any issues. Risk assessment of biosolids even includes kids eating biosolids. So, the regulations and the best management practices that apply to biosolids already take recreational use into account.”

The use of biosolids and sediment can go beyond the creation of parkland. “Urban soils are generally marginal and suffer from severe compaction. They lack organic matter and soil fertility. Urban farming is becoming popular but urban soils are in bad shape. Some are contaminated with heavy metals. Biosolids offer a solution for all these issues.”

Read more about Hundal’s work in Journal of Environmental Quality. For more on confronting the challenges of urban soils, seehttps://www.soils.org/discover-soils/soils-in-the-city.