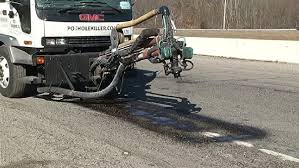 The Rhode Island Department of Transportation (RIDOT) announced today that as it is closing the books on the 2015-16 winter season, it is seeing a sharp reduction in the number of potholes thanks in large part to its decision to deploy automated pothole patching machines.

Dubbed the “Pothole Killer,” these machines were brought into service to help restore roads following the harsh winter of 2014-15. RIDOT sought to complement its current pothole patching methods with this innovative, new technology. The machines allow for potholes to be repaired by workers safely inside the vehicle cab as opposed to the more hazardous and vulnerable environment on the highway. Additionally the patches can be applied in below freezing temperatures, yet are more durable and longer lasting as compared with traditional methods.

“Potholes are not just a nuisance – they can cause damage to cars and increase the risk of crashes,” Governor Gina M. Raimondo said. “Instead of relying on the old way of filling potholes, we’ve implemented new technologies such as these automated pothole patchers to get the job done quicker and better, and keep Rhode Islanders safe.”

“One of the most basic and important functions of RIDOT, where the rubber meets the road literally, is filling potholes,” RIDOT Director Peter Alviti, Jr. said. “This is a good example of using innovative materials, methods and management to create cost-effective solutions for maintenance of our roadways and bridges.”

The effectiveness of the pothole patchers reflected in the number of claims for pothole damage filed with RIDOT. Taking into account an average number of claims over the last five years, the number of pothole claims this year were down more than 70 percent. RIDOT averaged approximately 560 pothole claims per year in the previous five years. This past winter, the Department only received 151 claims. Although this past winter may appear milder compared to the previous winter, it was actually considered an average winter in terms of severity with a total of 14 storms.

The pothole killer trucks utilize the latest spray-injection technology to repair potholes more efficiently and safely while ensuring a longer-lasting fix. The patchers are capable of cleaning away debris and filling a pothole in only a few minutes. Using a special emulsion that can be applied in below freezing temperatures, the Pothole Killers provide permanent patches all winter long.

Traditional methods using cold patch often resulted in potholes that had to be filled repeatedly, resulting in added cost and added headaches for drivers with poor quality roads. In contrast, the patches applied by this innovative technology provide permanent patches that last much longer than traditional methods.

As a result of this successful pilot year, RIDOT intends on making this technology an integral part of its pavement management maintenance program in the future.

Comments are disabled
NEXT ARTICLE
US Department of Transportation adds NXP Security Technologies to Smart City Challenge
May 18, 2016
PREVIOUS ARTICLE
75 State-of-the-Art Buses Hit the Streets in Queens
May 18, 2016