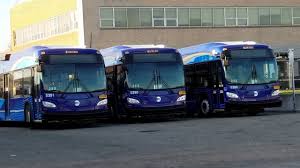 Governor Andrew M. Cuomo today announced the arrival of the first of 75 new buses that are being deployed into service this year as part of a concentrated effort to address overcrowding and modernize the MTA. In March, the Governor announced the addition of 2,042 buses, equipped with Wi-Fi and USB charging ports, to the MTA fleet over the next five years, replacing 40 percent of the current fleet.

The new buses will start hitting the streets today, with seven buses going into immediate service. The remaining buses will be delivered at a rate of 4-5 per day, with all 75 arriving this summer and operating in Richmond Hill, South Jamaica, South Ozone Park, Springfield Gardens, Rosedale and Far Rockaway.

At an event at the Michael J. Quill Bus Depot in Manhattan, the Governor also announced the success of a field test for MTA eTix, a free app that will allow Long Island Rail Road and Metro-North customers to purchase train tickets anytime, anywhere on their mobile devices, instead of using paper tickets. The LIRR and Metro-North expect to launch the first phase of the MTA eTix app’s rollout on select lines in June, and the app will be available to all railroad customers by the end of 2016.

“Today, we are reimagining the MTA for the 21st century and creating a transit system that will meet the needs of the next generation of New Yorkers,” Governor Cuomo said. “With our unprecedented MTA capital plan, we are building for the future with major initiatives that will improve the commute of millions of New Yorkers, reduce overcrowding and bring new technology to our subways, buses and railroads. New York is investing the in the MTA like never before, and together we are recapturing the boldness and ambition that made this the Empire State in the first place.”

MTA Chairman and CEO Thomas F. Prendergast said, “We see the debut of these new buses and the roll out of the MTA eTix field test as important steps forward as we continue to renew, expand the transit system and create an enhanced experience for our customers.”

A beta version of the MTA’s eTix app has been in the hands of approximately 150 customers who ride the Long Island Rail Road Port Washington Branch or Metro-North’s Hudson Line. During the last few weeks, these railroad customers have been using the app in real-time, buying and displaying train tickets during the course of their commutes.

Both conductors and participating customers have been monitoring the app’s performance, and reporting any problems they encounter to the app development team in order to ensure that the technology works seamlessly when it is rolled out across the railroads. Preliminary survey results indicate widespread satisfaction with the app.

MTA eTix will first debut on the LIRR’s Port Washington Branch and Metro-North’s Hudson Line next month. After introducing the app on these two rail lines, the MTA will make e-ticketing available to all Long Island Rail Road and Metro-North customers by the end of 2016. MTA eTix will be accessed as a stand-alone app or through the popular TrainTime apps, where customers can check schedules and see service status. MTA eTix offers account management tools, giving railroad customers the ability to secure refunds for unused mobile tickets, request duplicate receipts and manage profile info such as password and linked credit card numbers.

The app is being developed and implemented by Masabi, Ltd., which has also created electronic mobile ticketing programs for MBTA Commuter Rail in Boston, NICE Bus on Long Island and Metrolink in Los Angeles. Masabi was selected in April 2014 following a competitive request for proposals issued in March 2013.

In a related announcement, last month the MTA issued a request for proposals to create a new fare payment system for MTA New York City Transit subway and buses, MTA Bus, and the Staten Island Railway, which will be fully interoperable with the mobile ticketing app that is now being tested on the Long Island Rail Road and Metro-North Railroad. The system will offer a variety of convenient ways to pay for fares, including smartphones, contactless bank cards and pre-paid cards. Subways and buses will start using e-ticketing in 2018 in addition to regular fare cards.

These initiatives build on the state’s significant efforts to fundamentally transform the MTA and ensure it’s equipped to meet the challenges and demands of 21st century travel. This year, the state dedicated $8.3 billion in funding to the MTA’s $27 billion Capital Plan – the largest and most ambitious spending plan in state history. This investment, when combined with existing efforts, will add more than 3,100 buses and 1,400 subway cars to the system, add four new Metro-North stations in underserved areas of the Bronx, add a third track to the LIRR’s main line, extend the Second Avenue Subway to East Harlem, bring Metro-North service to Penn Station and continue building the East Side Access project so that LIRR riders will be able to travel into Grand Central Terminal.