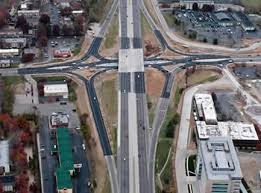 Matt Ball on May 17, 2016 - in Corporate, Design/Engineering, Transportation

COLUMBIA, Mo.—The state of Missouri is a pioneer in adopting Diverging Diamond Interchanges (DDIs) named for their innovative design. At these interchanges, drivers are diverted to the left side of the road prior to merging onto an interstate, freeway or highway. The first such interchange in the U.S. opened in Springfield, Mo. in 2009. Recent studies from the University of Missouri have found that these unusual designs are safer and save lives.

Statewide implementation of DDIs has been investigated mostly by MU civil engineers who recently published three studies analyzing the safety of these inventive designs. By analyzing more than 10,000 crash reports of DDIs in Missouri and in states that have adopted the designs, civil engineers have determined that overall crashes decreased by more than 50 percent nationwide. Additionally, fatal and injury crashes decreased by more than 70 percent, proving these cutting-edge designs are efficient, effective and life-saving.

Unlike conventional interchanges at which drivers always stay in the right lane and make wide left turns onto the overpass, DDIs are considered safer because they utilize all left turns and decrease crashes at crucial interchanges. DDIs divert drivers exiting major thoroughfares by requiring traffic on an overpass or underpass to drive on the left side of the trafficway, improving safety by eliminating left-turning conflicts common in diamond interchanges; traffic flow is optimized through traffic signals.

“Before our studies, little information was available about the safety effects of diverging diamonds,” said Carlos Sun, professor of civil and environmental engineering in the MU College of Engineering. “Two of our research studies analyzed several years of crash data and controlled for several variables, including traffic amounts, to account for safety of the interchanges before and after they became DDIs while taking into account DDI ramp lengths, giving us a more complete and robust sample of results that we feel is very comprehensive.”

Henry Brown, a civil research engineer at MU, was lead author on a third study that investigated common practices for diverting traffic while constructing and later maintaining geometric interchanges, which included DDIs. Brown and the team surveyed project managers on construction and maintenance projects for a variety of interchanges to see which practices tended to work the best and poured over construction plans to establish a set of best practices for the various interchanges.

“There’s very little guidance out there on how workers can safely divert drivers and change traffic patterns while implementing DDIs, roundabouts and other designs,” Brown said. “If workers are retrofitting a diamond interchange, they’re actually completely changing the traffic pattern and that just can’t happen by flipping a switch; it takes careful planning.”

Sun, Brown and the team determined that crews should build the interchanges in phases and then close them briefly to install signage to alert drivers to the change in traffic flow. Their study provides real-world guidance to traffic workers and teams as they implement safer traffic designs. “Maintenance of Traffic for Innovative Geometric Designs Work Zones,” recently was published in the Transportation Research Record, Praveen Edara, associate professor of civil and environmental engineering at MU, and Tim Kope and Amir Khezerzadeh, students in the MU College of Engineering, co-authored the paper.

“Safety Evaluation of Seven of the Earliest Diverging Diamond Interchanges Installed in the U.S.,” and “Site-specific Safety Analysis of Diverging Diamond Interchange Ramp Terminals,” also recently were published in in the Transportation Research Record. Boris Claros, a graduate student at MU, partnered with Sun, Edara and researchers from Wayne State University in Michigan, the University of North Carolina and North Carolina State University on the studies.

Comments are disabled
NEXT ARTICLE
Next Stage of Permanent Flood Protection for Fargo-Moorhead Area Follows EIS Report
May 17, 2016
PREVIOUS ARTICLE
VisualEyes Provides a Forecasting Boost to the Energy Industry
May 17, 2016