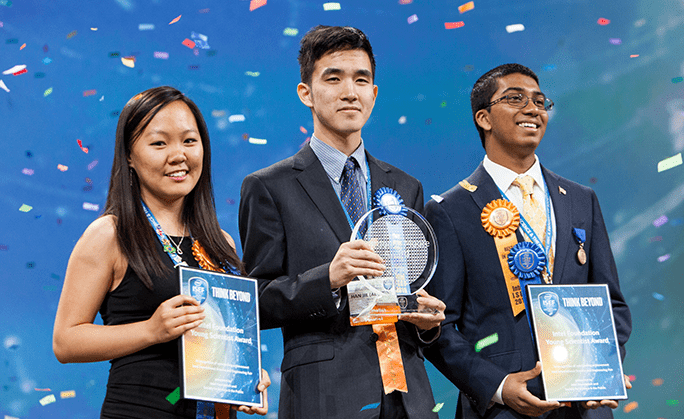 PHOENIX, May 13, 2016 – Intel Corporation and the Society for Science & the Public today announced that Han Jie (Austin) Wang, 18, of Vancouver, Canada, is the recipient of the first place Gordon E. Moore Award and US$75,000 for developing microbial fuel cells (MFCs) that more efficiently convert organic waste into electricity. The award was given at this year’s Intel International Science and Engineering Fair, which is the world’s largest high school science research competition.

Wang, who received the top honor, identified specific genes in genetically enhanced E. coli bacteria that enabled them to generate power efficiently. His system can produce significantly more power than existing MFC processes at a cost that is competitive with solar energy, which he believes will make MFCs commercially viable.

Syamantak Payra, 15, of Friendswood, Texas, received one of two Intel Foundation Young Scientist Awards of US$50,000, for developing a low-cost electronically aided knee brace that allows an individual with a weakened leg to walk more naturally. When Payra tested his prototype with two individuals partially disabled by polio, it almost immediately restored a more natural gait and increased mobility.

Kathy Liu, 17, of Salt Lake City, Utah, received the other Intel Foundation Young Scientist Award of US$50,000 for developing an alternative battery component that could significantly improve battery performance and safety. Liu’s rechargeable battery is smaller and more lightweight, without the risk of fire inherent in lithium-ion batteries, which are used in planes, mobile phones and even hoverboards.

“Intel congratulates this year’s winners and hopes that their work will inspire other young innovators to apply their curiosity and ingenuity to today’s global challenges,” said Rosalind Hudnell, vice president in Human Resources, director of Corporate Affairs at Intel Corporation, and president of the Intel Foundation. “This international science and engineering exhibition is an excellent example of what can be achieved when students from different backgrounds, perspectives and geographies come together to share ideas and solutions.”

The 2016 Intel International Science and Engineering Fair featured more than 1,700 young scientists selected from 419 affiliate fairs in 77 countries, regions and territories. In addition to the top winners, approximately 600 finalists received awards and prizes for their innovative research, including 22 “Best of Category” winners, who each received a US$5,000 prize. The Intel Foundation also awarded a US$1,000 grant to each winner’s school and to the affiliated fair they represent.

The following lists the 22 Best of Category winners, from which the top three were chosen:

“Our top winners this year – Austin, Syamantak and Kathy – clearly demonstrate that age has no bearing on your ability to conduct research and come up with solutions to important problems,” said Maya Ajmera, president and CEO of Society for Science & the Public. “We congratulate them not only for their success but on their dedication and hard work. They and the rest of the Intel ISEF finalists are the rising stars of science, technology, engineering and math, and we look forward to watching them pursue their passions and in turn make the world a better place for future generations.”

The Intel International Science and Engineering Fair honors the world’s most promising student scientists, inventors and engineers. Finalists are selected annually from hundreds of affiliated fairs. Their projects are then evaluated on-site by approximately 1,000 judges from nearly every scientific discipline, each with a Ph.D. or the equivalent of six years of related professional experience in one of the scientific disciplines.

A full listing of finalists is available in the event program. The Intel International Science and Engineering Fair 2016 is funded jointly by Intel and the Intel Foundation with additional awards and support from dozens of other corporate, academic, governmental and science-focused organizations. This year, approximately US$4 million was awarded.

Society for Science & the Public, the nonprofit organization dedicated to public engagement in scientific research and education, has owned and administered the competition since its inception in 1950 as the National Science Fair.

To learn more about the Society, visit www.societyforscience.org