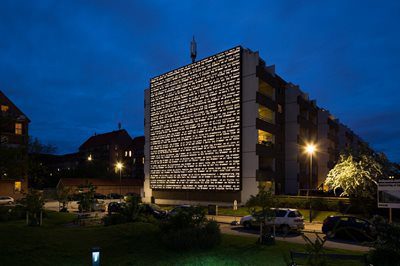 Matt Ball on May 16, 2016 - in Buildings, Corporate, Design/Engineering

Among other winning projects are the Lincoln Square Synagogue in New York, the Artron Wall in China and the Australian War Memorial in Canberra.

From a distance the gable on the apartment building on a street in Valby, Copenhagen, looks like an ordinary wall, but upon closer inspection it consists of a series of phrases that express local residents’ innermost thoughts and dreams. The creative mural has now won the international lighting award Special Citation, which is considered one of the most prestigious lighting design awards in the world given to a particularly innovative lighting design. Ramboll designed the light behind the gable and receives the award from the International Association of Lighting Designers (IALD), an internationally recognised organisation dedicated to professional lighting designers. Among the other winners in the awards competition are the Lincoln Square Synagogue in New York, the Artron Wall in China and the Australian War Memorial in Canberra.

The idea for the illuminated mural came from the Danish Arts Foundation and the Copenhagen Urban Renewal in Valby, which have selected a number of gables in the Danish capital, Copenhagen, to be decorated. The installation, entitled ”the Wall of Dreams”, was created after a series of workshops where the Danish poet Morten Søndergaard collected over 300 dreams from residents. Both children and adults have eagerly contributed.

The words of his transcription were pounded through anthracite grey plates, and the letters create a shadow relief that changes according to the daylight, time of year and even the weather. As lighting designers, Ramboll chose LED sources, and aimed them so that light bounces off the back wall and shines indirectly through the holes in the façade. The source of light remains concealed, not blinding the spectator or shattering the illusion.

The Wall of Dreams appealed to the judges through the project team’s belief that lighting – along with the many other disciplines involved in its creation and realisation – can help stimulate community involvement by fostering a sense of individual and group ownership in the urban environment.

The award was presented to lighting designer Vladan Paunovic from Ramboll in San Diego at the 33rd annual IALD International Lighting Design Awards. 17 projects from eight countries were on display – including religious spaces, memorials, façades and even a gas station. The winners represent some of the most innovative and inspiring work found anywhere in the world of architectural lighting design.

Read more about The Wall of Dreams here