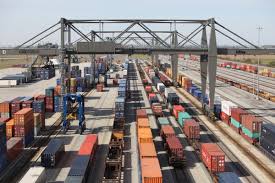 The Bureau of Transportation Statistics (BTS) has released the rail network and rail nodes portion of the 2016 National Transportation Atlas Database (NTAD). These datasets are available for download as a zipped shapefile.

Due to high public demand, BTS is making these data available as a pre-release instead of in late June when NTAD 2016 will be released. This release includes the United States portion of the new North American Rail Network (NARN).

The NARN, funded by BTS and the Federal Railroad Administration  (FRA), is an enhanced spatial data set that brings together the previous FRA network, data from the FRA Automated Track Inspection Program, and other government data sources into a single rail network. These data, adopted by the Association of American Railroads Geographic Information Systems Rail Committee as the industry standard, are important to transportation professionals and the public for displaying and analyzing geospatial information on or around the rail infrastructure in the U.S.

Comments are disabled
NEXT ARTICLE
New Report Points to Benefits of Embedding Digital Technologies in Infrastructure
May 16, 2016
PREVIOUS ARTICLE
Laing O’Rourke’s Northern Water Treatment Plant has been named the Industrial Water Project of the Year at the 2016 Global Water Awards
May 16, 2016