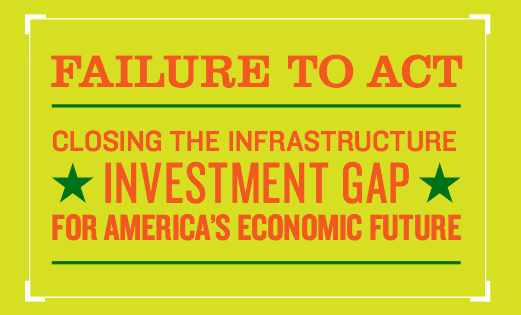 America’s infrastructure investment gap is hitting families where it hurts most – the wallet.

ASCE’s Failure to Act: Closing the Infrastructure Investment Gap for America’s Economic Future 2016 report, released May 10, estimates that continued underinvestment in infrastructure will cost each U.S. family $3,400 a year over the next decade.

“From lost time, to inconvenience, to spending money to fix our cars or a flooded basement, it’s a very real cost that we’re paying.”

The report is the latest in a series of Failure to Act studies, launched in 2011, that assesses how the nation’s failure to improve its infrastructure systems affects economic performance.

The 2016 study builds on the models established in the 2011 and 2012 research, updating data and projections for infrastructure in five different sectors:

The analysis shows that in the years since the earlier reports, various state actions along with some federal funding measures have helped stabilize the infrastructure gap, but the overall picture remains – underinvestment is negatively affecting the nation’s economy.

The most significant gap, according to the report, is in the transportation sector, where an estimated additional $1 trillion is needed across the network (including roads, bridges, and rail) during the next decade.

For businesses, this can mean increased production costs, increased cost of travel, and decreased consumer spending.

At home, it can mean fewer jobs, lower incomes, and more expensive infrastructure in the form of higher costs for transportation, electricity, and water.

As daunting as the challenges seem, the majority of the projections remain in the future tense. The report suggests that the economic consequences to both families and businesses could be avoided with an additional investment from Congress and the states of $144 billion each year.

“For the price of a cup of Starbucks coffee, about three dollars per day per household, we can prevent the loss of jobs, lower incomes, and costs to businesses,” DiLoreto said. “The cost of investment offers a good return, as it protects the GDP, jobs, family’s disposable income, and our overall competitiveness.”

The Failure to Act study provides an economic context for the ASCE Report Card for America’s Infrastructure reports, which grade the current state of national infrastructure sectors every four years. The most recent Report Card delivered a D+ average grade across 16 categories. The next national Report Card is slated for release in 2017. Read the full Failure to Act report, and learn more about the methodology behind the findings.