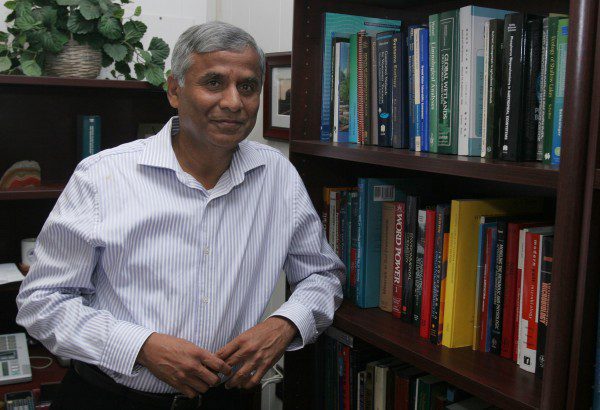 GAINESVILLE, Fla.—For his 40 years of groundbreaking work on nutrient cycling in wetlands aquatic systems, the chairman of the University of Florida Institute of Food and Agricultural Sciences soil and water sciences department has been named a winner of the National Wetlands Award.

Professor K. Ramesh Reddy is among five recipients of this year’s National Wetlands Awards, given by the Environmental Law Institute. Now in its 27th year, the program has recognized nearly 200 people from across the country for their exceptional and innovative contributions to wetlands conservation. The award recipients will be honored in Washington, D.C., during American Wetlands Month. The award ceremony is on May 11.

“As we walk through a wetland, we all admire beautiful plants, flowers, birds and other wildlife, and flowing water, but we rarely think about the ‘living soil’ under our feet,” Reddy said. “The chemical and biological processes in the soil essentially control the majority of functions and ecosystem services that provide wetlands. This is similar to the ‘brain’ orchestrating the many functions of human body.

“My passion for wetlands was influenced by my early work on rice paddies when I pursued the goal of sustainable food production through maximizing fertilizer use efficiency,” he said. “The biological and chemical processes I studied in these paddy soils formed the foundation of my understanding of complex hidden internal processes (now called biogeochemistry) in wetland soils.”

The recipients of the 2016 Awards are on the forefront of protecting wetland resources in the face of climate change and development, ELI President Scott Fulton said in a news release distributed by the organization.

“Through their dedication and achievements, they inspire wetlands protection across the country and worldwide,” Fulton said.

For more than 40 years, Reddy “has led groundbreaking research on the biogeochemical cycling of nutrients in natural and managed wetland and aquatic ecosystems, particularly in the Florida Everglades,” according to material from the ELI. “He is a renowned biogeochemist, mentor and leader in wetland science. He promoted an integrated approach to wetland science that included biogeochemistry in research and education.”

Reddy also has co-authored a book, “Biogeochemistry of Wetlands: Science and Applications,” and he has written more than 350 peer-reviewed papers. Reddy has served on the National Research Council Committee of the National Academy of Sciences for an independent review of the Everglades Restoration and he currently serves on the U.S. EPA Science Advisory Board’s Ecological Processes and Effects Committee.

The National Wetlands Awards are presented annually to people who have excelled in wetlands protection, restoration and education. The program is administered by the Environmental Law Institute and supported by the U.S. Environmental Protection Agency, U.S. Fish and Wildlife Service, U.S. Forest Service, Natural Resources Conservation Service, National Oceanic and Atmospheric Administration Fisheries and the Federal Highway Administration.