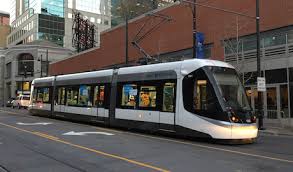 KANSAS CITY, Mo. – The U.S. Department of Transportation’s Federal Transit Administration (FTA) Acting Administrator Carolyn Flowers today joined Kansas City Mayor Sylvester “Sly” James Jr. and other local officials to celebrate the opening of a two-mile streetcar line through the city’s revitalized downtown area. The line, credited by local officials with spurring billions of dollars in investment as it was being planned and constructed, is expected to serve tens of thousands of residents as well as visitors to the growing Midwestern city.

“The Department is proud to partner with Kansas City on its new streetcar, which will provide important connections to jobs, community services and other opportunities for residents,” said U.S. Transportation Secretary Anthony Foxx. “The streetcar will continue to reinvigorate the heart of the city by bringing together neighborhoods, improving transportation options, and attracting new housing and economic activity.”

The U.S. Department of Transportation (DOT) helped fund the project with $20 million from a Transportation Investment Generating Economic Recovery (TIGER) grant and approximately $17 million in other DOT funds. Since 2009, DOT has awarded $562.7 million to 16 streetcar projects across the country, including starter lines in Dallas, Atlanta, Cincinnati, and Tucson, as well as extensions to systems in Portland and New Orleans.

“Streetcars are an increasingly popular transportation choice for cities seeking new ways to integrate reliable, convenient transit services that connect residents to jobs and other destinations,” said FTA Acting Administrator Flowers. “By supporting the Kansas City Streetcar, we are helping to create a strong transportation network that gives people options and helps build ladders of opportunity throughout the region.”

Streetcar systems not only contribute to improved mobility and enhanced development opportunities, but also help stimulate the economy. In Kansas City, more than $1 billion from private and public sources has stimulated economic growth and redevelopment, including new housing, retail and commercial projects. Since the streetcar project began in 2012, the city has recorded 40 projects along the streetcar route, including a $300 million, 800-room hotel and convention center under development, a $121 million project to convert a 30-story office building to apartments, and the $37 million renovation of a vacated theater that will house an 85,000-square-foot community center.

Comments are disabled
NEXT ARTICLE
Dewberry Designated a Certified Commissioning Firm
May 9, 2016
PREVIOUS ARTICLE
State DOT Executives Share “Next Generation ITS” Experiences, Prep & Planning at ITS America 2016
May 9, 2016