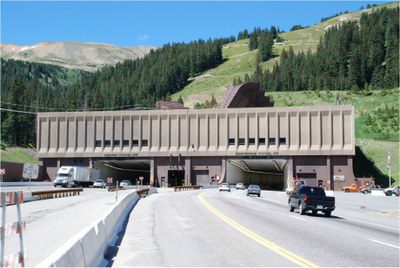 Matt Ball on May 9, 2016 - in Maintenance, Projects, Transportation

The system, installed over both tunnel bores during the past year, is not designed to completely extinguish a vehicle fire but rather provide the critical time that is needed for first responders to safely approach the scene and take action.

“Today is a special day for Colorado and anyone who travels to our mountain communities,” said Rep. Jared Polis (CO-02).  “The new fire suppression system will enhance public safety, as well as protect the tunnel that is essential for our western economic development.  I’m pleased that our work in Washington, D.C. helped make possible the completion of this project.”

The EJMT is celebrating its 43rd year without a fatality occurring inside it. Close calls have transpired and fires – primarily vehicle – do take place.  Because of this, CDOT has first responders and firefighting equipment at the EJMT complex.

“If we had to close down either one of those tunnel for an extensive period of time due to fire damage, it would have a big impact on the state’s economy since this is the primary connection point between eastern and western Colorado,” said CDOT Executive Director Shailen Bhatt.  “In addition, having this system in place helps protect a critical feature of Colorado’s and the nation’s transportation infrastructure.”

Funding for the $25 million system was initiated in 2013 when the Legislature established the Petroleum Cleanup and Redevelopment Fund within the Division of Oil and Public Safety, a part of the Colorado Department of Labor and Employment (CDLE).  The legislation included $5 million of the critical seed money for the project, allowing CDOT to seek the additional $20 million to build and install it.  The legislation was carried by Sen. Cheri Jahn, former Sen. Steve King and Reps. Millie Hamner and Ray Scott.