ODOT is Updating Curve ‘Advisory Speed’ Signs Around the State 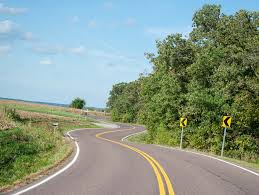 Matt Ball on May 6, 2016 - in Corporate, Maintenance, Transportation

SALEM – You do it multiple times every day and probably aren’t even aware of it: adjust your speed going around a curve to 5 to 10 miles per hour above the number on those yellow curve advisory speed signs. But here’s a heads up: Those signs and speeds are probably going to change – and they’re going to better match the curve, so you’ll want to pay attention, everywhere you go in the state.

In fact, some 50 percent to 75 percent of all curve speed advisory signs will change over the next three to four years, most seeing an increase in the advisory speed of 5 to 10 mph. Why is Oregon doing this? There are three main reasons:

Time for an update

Current advisory speeds were set by investigators using the ball bank indicator method, which involved driving curves multiple times to figure out how far to the right or left a ball suspended in liquid traveled in its arc. The variability inherent in this method and irregularities in road surfaces contributed to setting inconsistent and conservative advisory speeds – which is why so many drivers are comfortable going faster than the posted advisory speeds. In addition, roadway crews would sometimes reduce speeds even further on curves where other problems occurred. Today, ODOT employs GPS technology that allows an engineer to drive a curve fewer times and provides more consistent and reliable results. Special software processes the data after each trip so engineers can set the correct advisory speed.

Many speeds going up

Most curve advisory speeds will increase by 5 to 10 mph (though some will increase even more). ODOT crews and contractors have already started replacing or removing signs. The effort will continue through 2019. All public roads in Oregon that see volumes of more than 1,000 vehicles a day are subject to the new FHWA requirements. ODOT is lending GPS curve analysis equipment to local jurisdictions to assist in the process of updating the speed advisory on local and county roads.

Eric Leaming, an ODOT Traffic Devices engineer involved in the curve analysis, said it is going to be very important to watch and follow the new advisories.

“Before, advisory speeds were very conservative and inconsistent,” Leaming said. “Now, these advisory speeds are going to be uniformly closer to the speeds drivers are comfortable traveling at through a curve. You won’t want to go faster than the advisory speed.”