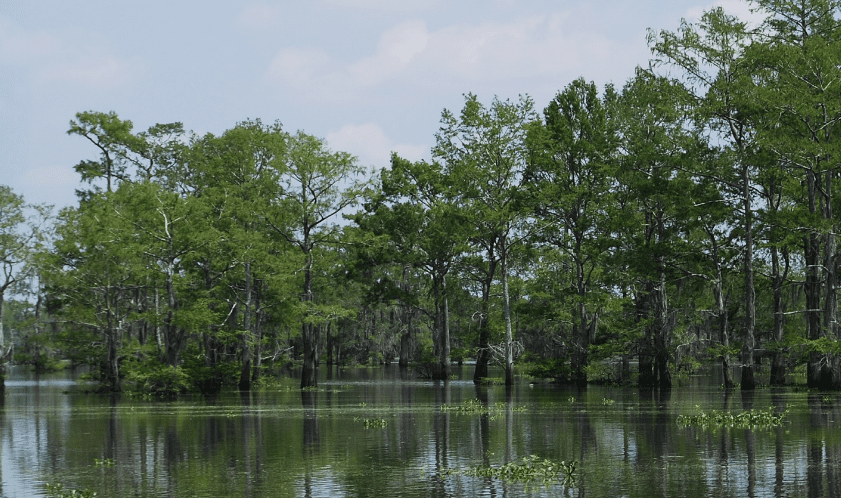 BATON ROUGE, La.—As part of an effort to preserve Louisiana’s fresh water resources, RTI International worked with The Nature Conservancy (TNC) to develop two online tools, released today, that offer a first-of-their-kind look at how Louisiana’s waters interact with each other. These tools will help fishermen, oystermen, planners, decision makers, and all Louisianans understand the state’s unique water flow patterns.

Named HydroFlows and OysterFlows, these two web apps are part of TNC’s Louisiana Freshwater Assessment project and feature results from a statewide water flow model that was done by The Conservancy and RTI International.

“It’s incredible that a state so closely tied to the water does not yet fully understand how that water works together,” said Keith Ouchley, director of The Nature Conservancy in Louisiana. “Understanding how water flows in our state is vital to planning our water future. We built HydroFlows and the modeling behind it so that Louisiana has the tools it needs to understand how water flows not only now but into the future. You can open the app and investigate important flow statistics down to very small scales in Louisiana. Or you can investigate flows at larger scales.”

These new apps are important not only to Louisianans living away from the coast, but those who have any connection to the water and are the newest addition to the Louisiana Freshwater Assessment project that was released to the public last year.

“If you like oysters, then you need to pay attention to decisions made far upstream. OysterFlows was built to help us do that by allowing you to see how decisions that affect the amount of water flowing down rivers affect oyster reefs at the coast. We chose the Sabine and Calcasieu Rivers as our pilot for the web app.t. Because decisions made over 100 miles upstream can impact oysters on the coast, we need to be thinking far past the coast so that we can make the choices that will provide for our fisheries and fishing industries into the future” Ouchley said.

To develop these applications, RTI applied the Watershed Flow and Allocation model (WaterFALL®) to develop a 30-year daily time-step scenarios of streamflow across the catchments of the enhanced National Hydrography Dataset (NHDPlus) stream network within Louisiana.

WaterFALL is a rainfall-runoff model that simulates surface runoff and baseflow stream contributions on a daily basis using land use, soils, and climate characterizations at the NHDPlus scale. It was developed at RTI using internal funding and is now used as a project tool throughout the eastern U.S.

“WaterFALL was developed out of a desire to provide a high-resolution watershed model that was not overburdened by data requirements or model parameters yet still simulated all major components of the hydrologic cycle,” said Michele Eddy, environmental engineer at RTI International and the project’s principal investigator. “Through multiple applications across the eastern U.S., including the entire state of Louisiana conducted for this project, WaterFALL has been shown to simulate streamflows as accurately as other more data and labor intensive models that function at larger scales. With WaterFALL we provide daily streamflows for every stream segment within a catchment allowing for a local scale look at the impacts of land use, climate, and water use changes on the immediate stretch of river and all downstream reaches.”

“Partnering with the environmental information systems staff and statisticians at RTI, we were able to design and implement the HydroFlows and OysterFlows apps within TNC’s existing web framework to provide a means for interpreting the WaterFALL data within a management context. These apps provide an example of the diverse capabilities within RTI that allow us to address both the environmental and information technology needs of a client and their stakeholders.”

Developed in partnership with the Baton Rouge Area Foundation, the Walton Family Foundation, and the Anne Ray Charitable Trust, these tools are freely available for use by anyone and reside in the Freshwater Network.

“We wanted to make something that anyone can use. But the capabilities go much beyond that,” Ouchley said. “We can also help folks put this model to work on custom questions and applications, such as investigating proposed water transfers, how the placement of specific structures can alter water flows, and looking at alternatives for a facility based on potential water quality and quantity impacts.”

Comments are disabled
NEXT ARTICLE
ODOT is Updating Curve 'Advisory Speed' Signs Around the State
May 6, 2016
PREVIOUS ARTICLE
MBTA Projects 12.8 % Reduction in Energy Costs
May 6, 2016