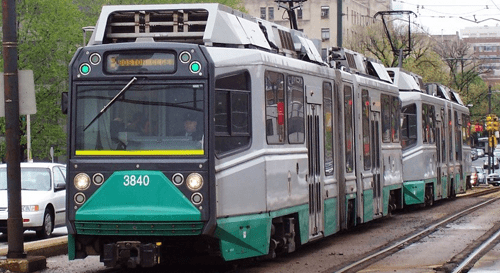 BOSTON, May 4, 2016—The MBTA projects a 12.8 percent reduction in energy costs for the 2017 Fiscal Year, and expects to see additional savings during the next three years, according to a presentation made recently to the MBTA’s Fiscal and Management Control Board.

The cost savings are the result of increased energy efficiency, utility contract management, and implementation of an enterprise energy management system.

The T’s energy management strategy has three key elements: use less; buy it and use it more efficiently; and produce it from renewable sources or recapture spent energy.

Methods for achieving cost savings include using more energy efficient systems at over 80 facilities (such as the lighting upgrades at Roxbury’s Dudley Square bus station pictured below), benefitting from renewable energy generated by wind turbines at sites in Kingston and one coming on-line at Bridgewater, and upcoming solar power purchase agreements at MBTA parking lots.

“The MBTA has increased its focus on energy management, with a specific eye toward energy conservation as well as developing new renewable energy projects,” said MBTA General Manager Frank DePaola. “We understand the important role the T plays in the Commonwealth’s energy management and conservation efforts.”

In January 2012, the MBTA commissioned its first wind turbine generator at the Kingston Layover Facility. The Kingston Commuter Rail Layover Facility wind turbine project will produce electrical output from a 100 kW turbine, an effective match for this facility’s estimated annual electric load of 255,000 kilowatt hours per year. The 750 kilowatt turbine to be built along the commuter rail right of way in Bridgewater will generate power that, unlike Kingston, will not be used on site but will be sold back to the regional electrical grid. Both turbines were funded using primarily Federal Transit Administration (FTA) funds coming from the Transit Investments for Greenhouse Gas and Energy Reductions (TIGGER), as well as a grant from the Massachusetts Clean Energy Center (MassCEC).

The MBTA utility budget for FY16 is $48.4 million, and covers six types of utilities: electricity; natural gas; heating oil; Steam; jet fuel; water. But the majority – $42.5 million – of this budget is for electricity.

Additional power costs for transmission charges, other ancillary charges, and capacity costs will bring the T’s total forecasts for FY16 through FY18 to between $33 million and $42 million annually.

Through improved management of utility contracts, the T expects to achieve $25 million in savings over five years on its wholesale electricity contract.