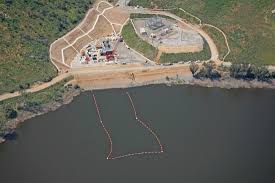 SAN DIEGO, Calif., May 5, 2016—A series of key projects designed to boost water system resilience for San Diego County residents has won the 2016 Excellence in the Constructed Project Award from the United States Society on Dams. Black & Veatch provided construction project management and design services on two of the four completed key facilities of the Emergency and Carryover Storage Project (E&CSP), which provides the region with up to six months of emergency water storage.

More than 80 percent of the water used in San Diego County is imported from Northern California and the Colorado River. The $1.5 billion E&CSP project, owned by the San Diego County Water Authority (SDCWA), is a system of reservoirs, interconnected pipelines and pumping stations that provide water system resilience and reliability to the San Diego region if imported water deliveries are interrupted due to events such as a prolonged drought or damaging earthquake.

“Disruption to the imported water supply system would have serious consequences for the region,” said Kevin Davis, Black & Veatch Associate Vice President and Project Director for the company’s involvement on the E&CSP. “This series of projects is a prime example of how holistic water planning, investment and building in flexibility all come together to create water system resilience.”

For the San Vicente Dam Raise, a project that more than doubled the storage capacity of the San Vicente Reservoir, Black & Veatch provided construction project management services as part of a joint venture team with Parsons.

The project raised the original dam by 117 feet to a new height of 337 feet, resulting in a 152,000 acre-foot increase in reservoir capacity. It is the world’s largest dam raise using roller-compacted concrete (RCC).

Black & Veatch also provided pumping station design for the San Vicente Pipeline and Pump Station project, completed in 2010 as part of the E&CSP. This award-winning project features an 11-mile pipeline, pumping station and surge control facility that connects and moves water from the San Vicente Reservoir to SDCWA’s Second Aqueduct and to water agencies in the central and southern areas of the county.

Black & Veatch is an employee-owned, global leader in building critical human infrastructure in Energy, Water, Telecommunications and Government Services. Since 1915, we have helped our clients improve the lives of people in over 100 countries through consulting, engineering, construction, operations and program management. Our revenues in 2015 were US$3 billion. Follow us on www.bv.com and in social media.